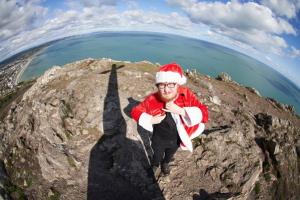 PAISLEY singer-songwriter  Quinny has revived his Christmas tradition with the release of a new song called ‘My December (How The Sun Stole Christmas)’.

No stranger to a festive tune, the new song follows his 2018 EP ‘Season’s Greetings from the Grotty Grotto’ and 2019 singles ‘It’s Not Even Your Birthday’ and ‘Christmas Gear’ – the latter of which saw him team up with British actor Richard Wilson for for the accompanying video.

And known for approaching the season with plenty of acerbic wit and humour, ‘My December (How The Sun Stole Christmas)’ is his piercingly sardonic return to the cause. On this occasion, he takes inspiration from the impending doom of global warming, writing from the perspective of a climate change denier in the year 3022 who’s Christmas has been ruined by the heat.

Replacing the normal tropes of yuletide joy with a healthy dose of cynicism, it’s a humorous portrayal of such conspiracy-wielding protagonists that also leaves us with a hard-hitting image of humanity’s ignorance towards the life-altering impact of climate change.

Ready for festive cheer? You may want to stick to the classics. But there’s no denying that Quinny is king of the alternative Christmas bop.