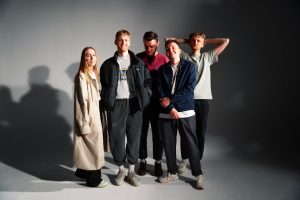 Described by the band as ‘quite mental health-y’, the track is an honest and intelligent slice of electronic pop – marked out by the band’s signature production style and experimental touches.

Understated but no less effective in delivery, it’s led by Robin Herbert’s hushed vocals and a driving drum beat – all building up to the catchy chorus hook.

Robin explains, “a lot of the lines are soundbites of things I’ve heard or have been said to me when myself or a pal has been in a bad way. The line “is he alright, has he taken something?” is a question I’ve heard echoed a few times in public over the years, if any of us have been struggling outwardly. The song is really about making light of some of those wee ugly times.”

They’re part of The Great Escape’s First Fifty for 2023, have recently played Neighbourhood, Mutations, Tenement Trail and Live at Leeds alongside support slots with Django Django and Efterklang and have been hosting their own bi-monthly in-the-round warehouse residency entitled, we should catch up if ur around, at Edinburgh’s The Biscuit Factory.