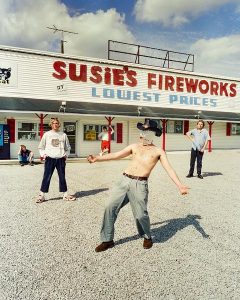 SHAME have announced details of their third album ‘Food For Worms, out 24th February 2023 via Dead Oceans.

The follow-up to ‘Drunk Tank Pink’, which arrived in early 2021, has been billed as the ‘Lamborghini of shame records’. Produced by the esteemed Flood, it sees them look more outwards than ever before, trying to capture the world around them.

Frontman Charlie Steen says ““I don’t think you can be in your own head forever. It’s weird, isn’t it? Popular music is always about love, heartbreak, or yourself. There isn’t much about your mates.”

The songs started to take shape in the run up to a few intimate shows which took place last year and saw them play two sets of entirely new material. Recorded while on tour in Europe, the record is brimming with the urgency, vitality and potent live energy that first launched them into everyone’s consciousness.

Accompanied with a thought-provoking music video, directed by James Humby, Steen comments: “Self-obsession, social media flagellation and death can all be seen in this Oscar nominated performance. No one’s ever done a video like this before and when you watch it, you’ll see why. Think Casablanca, but in colour, and better.”