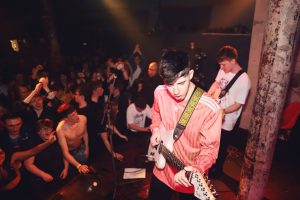 AFTER months of silence, The Dunts have surprised fans up and down the country with the release of their debut album ‘All That You’ve Waited For’.

Since first emerging in 2016, the band have made an indelible impact on Glasgow’s music scene and beyond – rising through the ranks from raucous nights in the Priory and Stereo, to taking on The Barrowlands at our very own Tenement Trail and headlining a massive show at SWG3. Squeeze in memorable sets at TRNSMT, Reading & Leeds, SXSW in America, various UK tours, Radio 1 airplay and two stand-out EPs in ‘Not Working is Class’ and ‘Self-Proclaimed Council Punk’ and their journey has been nothing short of impressive.

Their debut album therefore – although it arrive somewhat out of the blue – has been years in the making. Teaming up with long-term collaborators Johnny Madden, Chris Marshall and Jamie Holmes, it’s driven by the same vitality and urgency that first drew us to them in the first place. Featuring previously heard singles ‘Thinking of You’ and ‘Dimitri’, it’s otherwise brimming with previously unheard material that will please fans old and new alike.

As expected, the hooky vocal melodies, rampant guitars and unrelenting drums are all present and correct, effectively capturing the essence of  those frantic, besieging shows of yesteryear – but it’s The Dunts’ ability to comment on the world around them and their own personal experiences that continues to makes them stand out. It’s always been clear that they’re a band with something more substantive to say in a genre that is often plagued with empty platitudes – whether it’s on the current UK government, societal issues, coming of age tales in today’s Glasgow, and more.

A testament to their hard work and ambition over the last few years, as well as the fertile scene from which they sprouted, The Dunts ‘All That You’ve Waited For’ deserves to be heard far and wide.