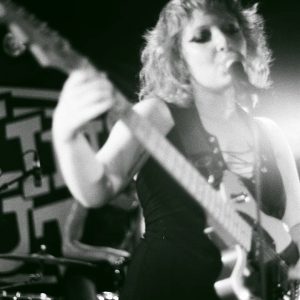 JUST two months ago, Tina Sandwich made her rapturous debut at Tenement Trail in front of a jam-packed crowd at BAaD. One of the many highlights of the day, we’ve been waiting tentatively for new material ever since – and we’re delighted to reveal that the rising star is back with another massive single called ‘Fast Cars (and Movie Stars)’.

Following on from her debut single ‘Up All Night’, the new song lives up to all that early potential and more – it’s an instantly addictive rocker brimming with star quality. Driven by surging guitars and pummelling drums, it finds the singer-songwriter embracing her rockier influences while lending a warning to those who pursue a glamorous lifestyle. As is Tina Sandwich’s way, there’s plenty of lyrical quips and hooks galore, as she fills us in on the track below.

She says “Gather round for a cautionary tale, warning against the perils of becoming consumed by a glamorous lifestyle. Fast Cars (and Movie Stars) asks what is left after the fake friends and phonies have kicked you to the curb and sped off into the distance. Writing this song, I wanted to fill it with easter eggs like any good movie, so expect intertextual references and plenty of honking horns!”

Check out the track here.

Health and Beauty 'In Disarray'

Baby Strange 'In The Flesh'