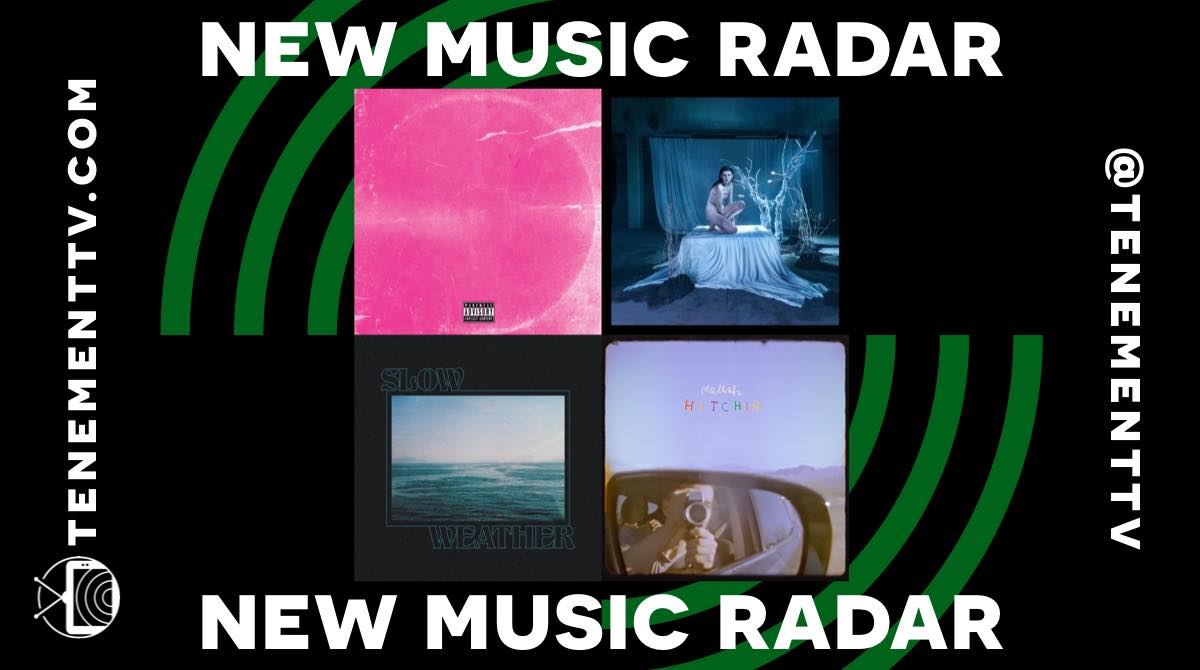 THIS week’s essential tracks include Lucia & the Best Boys, Joesef, Mellah and many more.

Lucia & The Best Boys ‘The State of Things’

It has been a prolific 12 months for Lucia & The Best Boys who today unveil their second EP of 2020 titled ‘The State of Things’. After ‘ETERNITY’ signalled a shift towards a more widescreen, eighties-influenced sound with its stylish synths and Madonna-like pop grooves, ‘The State of Things’ continues down this path but cuts even deeper in its lyrical revelations. Featuring the band’s highly addictive recent single ‘Perfectly Untrue’ and the heart-wrenching ‘Let Go’, both of which have garnered a great amount of praise from BBC Radio 1, it’s an EP soaked in heartbreak as Lucia bares her soul like we’ve never heard before. Completed with the addition of two new tracks in ‘Somewhere In Heaven’ and ‘Forever Forget’, it’s a moody, sombre collection that’s elevated by its deeply atmospheric production. Cinematic in nature, there’s nods to the power ballad era of the 1980s with the frontwoman offering one of her most captivating vocal performances to date.

Joesef ‘Does It Make You Feel Good?’

Since emerging as Scotland’s shining new pop hope in early 2019, Joesef has seized hearts and minds all over the UK, Europe and beyond with his smooth, soulful vocals and rich, jazz-infused compositions. Nearly a year after the release of his debut EP ‘Play Me Something Nice’, the singer-songwriter has shared its eagerly anticipated follow-up ‘Does It Make You Feel Good?’ and it marks another significant chapter in his rapid ascent to the top. It finds Joesef drawing a line under the relationship alluded to in his debut; while that EP was quite hopeful and misty-eyed, this latest collection finds him dealing with the aftermath of the break-up. It’s about “the bitterness, and the lies that stem from fading love, to the aftermath of dealing with loss and regret, and finally taking responsibility for my own actions” he says.

Joesef channels these feelings through smooth and enticing soul-pop on ‘Does It Make You Feel Good?’, his poignant lyrics often offset by warm, summery instrumentals that are recorded entirely in his East End bedroom. It’s an enticing dynamic that lends the EP a great deal of richness and depth. Real moments of intense vulnerability are captured on tracks such as the Loyle Carner assisted  ‘I Wonder Why’, the Motown inspired title track and the solemn closing ballad ‘Comedown’; a soothing ballad that sees Joesef’s harmonies accompanied by strings. A deeply personal moment of self-reflection, it’s a perfect summation of this beautifully crafted record. A confident follow-up to last year’s debut, ‘Does It Make You Feel Good?’ is sure to cement Joesef’s reputation as one of the UK’s most exciting new stars.

Otherwise known as multi-instrumentalist Liam Ramsden, Mellah has recently shown a knack for crafting infectious, leftfield pop songs with a razor sharp point of view and ‘Hitchin’ marks another stellar addition to his catalogue. Soaked in blues influences, the singer-songwriter plays numerous instruments throughout the track with his own vocal harmonies weaving in and out of gorgeous intertwining loops. It makes for a warm, full-bodied listen; highly addictive and impossible not to get immersed in.

“‘Hitchin’ is about relinquishing control,” he explains. “Forever pining and searching and digging for contentment, meaning and joy when in reality it’s in your back pocket, all you need to do is stop looking for it to notice the free ride

Continuing to tease the release of their forthcoming debut album ‘Home For Now’, out on 2oth November via AWAL, Babeheaven have unveiled another enchanting single called ‘Craziest Things’. The West London duo have nailed down their chilled-out, R&B inspired sound over the last couple of years and this latest offering encapsulates this perfectly; all languorous guitar lines, subtle trip-hop beats and dreamy, soothing vocals.

Slow Weather are a new duo consisting of Catholic Action’s Chris McCrory and Edinburgh-based singer-songwriter Annie Booth. After first meeting together in McCrory’s studio while working on different projects, the two discovered a unique chemistry that just had to be explored further and have since announced the release of their debut EP ‘Clean Living’. ‘Great White Male’ is our very first preview of that EP and it finds both artists exploring enchanting new ground. Opening in rather solemn fashion, there’s something incredibly satisfying about the vocal interplay between McCrory and Booth. The Catholic Action frontman is characteristically sharp in his delivery, disappointed and frustrated with the world against a looming backdrop of harsh electric guitar lines. It’s an intriguing juxtaposition; Booth’s soft harmonies and the fuzzy guitars that lurk underneath before finally bursting to life with a euphoric solo.

October and the Eyes ‘All My Love’

New Zealand native October and the Eyes announced her arrival this week with the release of her second single ‘All My Love’. With nods to acid-rock, shoegaze and post-punk, it’s a curious affair; dark and sinister yet potent and full of lust. Frontwoman October is a hypnotic presence, offering coy sweet-nothings over layers of ambient drones, crunched guitars and steady rhythms. It’s a strong introduction to her new EP ‘Dogs and Gods’ which lands on 20th November.

The Lathums ‘I See Your Ghost’

The Lathums are back with two and half minutes of off-kilter indie-pop in ‘I See Your Ghost’. The track is a slight departure for the four-piece, built around upstrokes and offbeats and fuelled by a strange sense of freneticism. Showcasing a darker side to their swaggering indie sound, the track previews a new EP called ‘Ghosts’ out later this year.

If you haven’t heard of NYC collective MICHELLE just yet then now is the time to get involved. The band have been building serious hype since their self-released 2018 debut album ‘HEATWAVE’, gaining plaudits for a sound that seamlessly weaves together R&B-inflected pop, sleek synths, plush harmonies, and buoyant grooves. Following the release of ‘SUNRISE’ back in July, their new single ‘UNBOUND’ was debuted on Annie Mac earlier this week as her Hottest Record in the World. Brimming with nostalgia, the track sounds like it has been plucked straight from the 90s; all groovy, lust-filled soundscapes and R&B influences.

London duo Girlhood continue to build momentum ahead of the release of their debut album on 23rd October. ‘It Might Take A Woman’ is a sleek, soulful number that continues the feel-good vibes we’ve heard on previous tracks such as ‘Queendom’ and ‘Sister’. Capturing the themes of the upcoming LP, the track is a joyous celebration of femininity and in their own words, a reminder that “we should be embracing and giving agency to our femaleness”

T Truman, otherwise known as The Vaccines keyboardist Timothy Lanham, unveiled his debut EP ‘Born To Be Right’ this week. Having already heard  preview singles ‘Holiday’, ‘Loretta’ and ‘Rock ‘n’ Roll’ in the run up to its release, the collection is a striking amalgamation of glitzy pop-rock and modern indie, channelling the spirit pop-rock heroes such as Elton John and Todd Rundgren in its ostentatious arrangements and gleeful pop melodies. Truman is a charismatic frontman; a playful narrator whose lyrical observations are as humorous as they are self-aware. It makes for a very enjoyable listen from start to finish. Brimming with confidence and ambition, T Truman shifts front of stage with ease on his debut EP ‘Born To Be Right’. We reckon there’re more exciting things to come.

Ed Nash ‘I Think You Feel The Same’

Ed Nash is taking some time away from his day job as bassist for the mighty Bombay Bicycle Club to release some solo material. Having previously released music under the name Toothless, this new project finds him exploring a more delicate and personal sound; a shift that’s exemplified on his newly released debut single ‘Think You Feel The Same’. Beautifully wistful, the gorgeous track sees Nash sing softly against gently twanging guitars and sweeping string arrangements.

Avocado Hearts ‘I Wish I Felt Good Most Of The Time’

Emerging from the city’s underground, Avocado Hearts is the new project of Glasgow-based singer-songwriter Jake Rodger. Under his new monikor, Avocado Hearts shared their debut EP last week and its titled ‘Too Little To Talk About’ – four tracks that pair deeply honest lyrics with brooding, atmospheric soundscapes. Taking influence from The National, The Cure and dark, dingy basement venues around Glasgow in the 1980s, it’s a distinctly lo-fi in production; rough around the edges yet no less compelling in execution. The EP’s opening track is a highlight, powered by a skittering drum machine, dual vocals and melodic guitar lines.