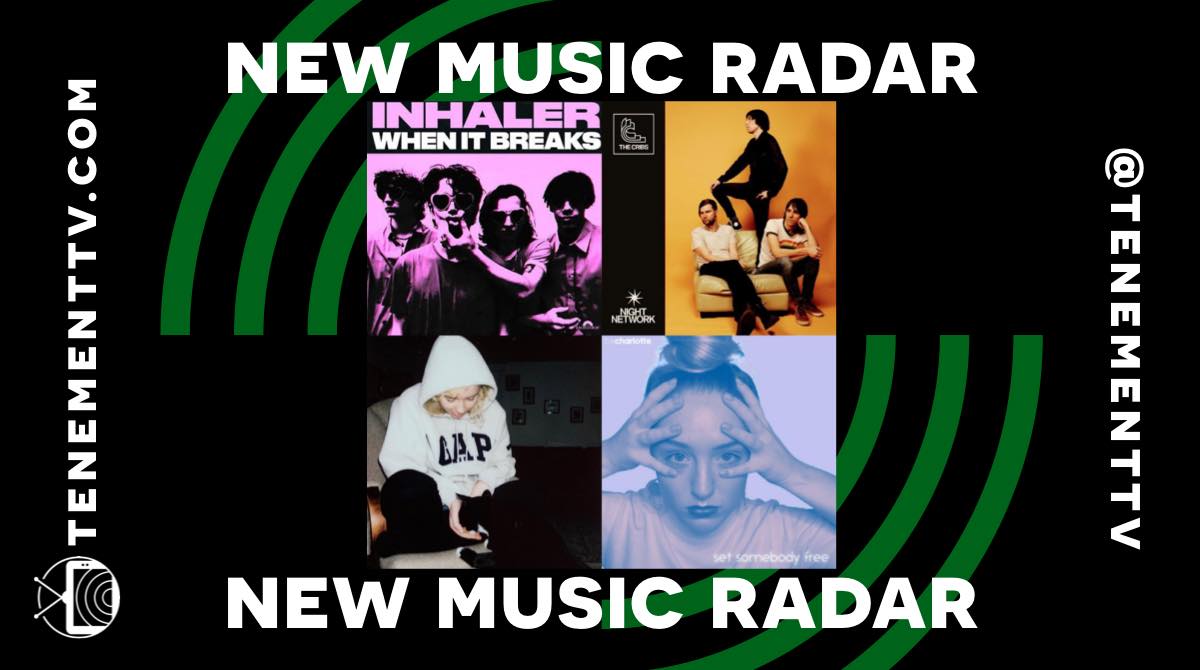 THIS week’s essential tracks include Lizzie Reid, Be Charlotte, Dev Green, MC Salum, Cloud Nothings, Julia Jacklin and more. Check them out below.

Just a couple of weeks after making her stunning debut with ‘Tribute’, Lizzie Reid has made a quick return with the release of a second single ‘Seamless’. While that first raw recording was a quick snapshot of the Glaswegian’s innate gift for narrative songwriting, this new track reveals even greater depths to her talents as she holds a microscope up to her innermost thoughts and unveils them with devastating power. Unlike the more optimistic ‘Tribute’, ‘Seamless’ finds Reid in the throes of heartbreak, retreading a past relationship with heart-wrenching poignancy and sincerity. It’s one of the most accurate depictions of heartbreak we’ve heard in some time; her voice warm and clear and every word packed with emotion. When delivered alongside gently twanging guitars and a stir of strings , her words have the kind of impact that is usually reserved for artists such as Laura Marling, Julia Jacklin and other renowned masters of their craft. “How could it be that tearing at the seams has been seamless for you?” is the devastating sign-off as we are left with a deeply mature yet hard-hitting reflection on love and loss.

Reid says of the track ““I listened to the demo on the train from London to Glasgow. I had tears streaming down my face. That was when I realised, I had written something deeply personal to me.”

Be Charlotte ‘Set Somebody Free’

Following the release of her debut EP ‘Dreaming with The Lights Off’ earlier this year, which garnered over 3 million streams and featured Radio 1 favourite ‘Lights Off’, Scottish pop star Be Charlotte is back with an uplifting new anthem called ‘Set Somebody Free’. All soaring pop choruses and defiant lyrics, the singer doesn’t hold back in delivering her unifying message. “It’s purpose is to encourage us to feel free to express ourselves even in our darkest moments.” she says. “Sometimes opening up and admitting you’re not feeling your best can feel so liberating and that’s what Set Somebody Free is for me. Because it’s currently not possible for music fans to share these moments at live shows , I think it further emphasises the importance of the universal togetherness that music can bring people”. Bursting with euphoria and soaring singalong choruses, ‘Set Somebody Free’ is a timely reminder that we’re all in this together.

Dev Green, the new moniker of former Model Aeroplanes member Grant Irvine, has followed up his debut single ‘Waterfalls’ with an equally impressive new offering called ‘No Sleep’. It’s an incredibly dynamic slice of alt-pop that wouldn’t sound out of place on Radio 1; a glorious mix of hooky choruses, funky guitar lines and off-beat drums that demands repetitive listens. Rich and vibrant in production, it’s a track that takes many left-turns; hushed verses shift into Knmore upbeat choruses which are in turn lifted by quick bursts of euphoria. It’s a heady concoction that suggests Green is more than ready for his turn in the spotlight.

Scottish folk singer Emma Miller has revealed a new taster of her upcoming debut EP with the release of ‘Sail Away’.  It’s a delicate offering that sees Miller deliver a quiet yet deeply affecting message of hope and reassurance; her powerful lyricism drifting beautifully over slow-building synths and subtle percussion. It’s a hypnotic listen that sees her write from a different perspective. She says “I wanted to write the song from the perspective of what a friend might say to me, rather than the critical inner voice we can slip into when we’re feeling particularly inadequate. I hope when people listen, they’ll be comforted in the knowledge that they’re doing just fine and no matter where you are in life, it’s ok to take the road less travelled.”

Dundee hip-hop artist MC Salum has been featured on Radar before with tracks such as ‘Jungle Kids’ and ‘Felina’ and now he’s back with another vibrant track called ‘Kaiba’. Salum is a breath of fresh air, pulling from sounds of the past and channelling them in his own unique vision to create tracks that are fun, innovative and undeniably infectious. Brimming with nostalgia, ‘Kaiba’ continues down this route with nods to 90s R&B in its hook-laden chorus and modern artists such as Flying Lotus in its jazz-infused electronic soundscapes. It’s a collaborative effort too – rapper Mike Vincent Colville brings a great energy to the track, regular collaborator LB Myles offers woozy electronic beats, Guy Galactic is on production duties and Kolibri (Magnum Haus/Model Aeroplanes) is a guest vocalist.

Cloud Nothings ‘Am I Something’

Cloud Nothings have previewed a new album with a pummelling rocker of a track called ‘Am I Something’. Driven by a relentless rhythm section and the raw grind of Dylan Baldi’s guitar, the anthemic track feels incredibly cathartic as the frontman dives into his deepest existential thoughts and delivers them with his signature earthy growl. It’s the first track to be heard from their new album which has notably seen them reunite with Steve Albini, who recorded their 2012 breakthrough record Attack On Memory.

Omar Apollo’s eagerly anticipated debut album ‘Apolonio’ arrives today after a string of impressive single releases. The album was previewed earlier in the week by ‘Want U Around’, a funky collab with Ruel which finds the singer longing for connection. Showcasing the truly soulful nature of his vocals as well as his impressive falsetto, it’s a Prince-esque number with silky electric guitar lines and smooth harmonies from Ruel.

Julia Jacklin ‘to Perth, before the border closes’

The world has changed significantly since Julia Jacklin released her acclaimed second album ‘Crushing’. It’s unsurprising then that her new single finds her getting to grips with a new altered reality. As its title suggests, it’s a soft and soothing track about transition and moving back to your homeland while it is still safe to do so. ‘Everything changes’ she sings over the warm, mellow instrumental. The song has been shared as part of Sub Pop’s Singles Club.

With just two singles out in the world, Dublin outfit Sprints are already making serious waves. Introducing their debut EP ‘Manifesto’, the band unveiled the anxious and crushingly loud ‘Drones’ last week. Tense and exhilarating in equal measure, the track squalls with feedback and industrial-sounding guitars while lead woman Karla Chubb puts in another compelling vocal display, howling the all-important refrain as the track builds to a thunderous crescendo.

“Drones is very literally about my struggles with imposter syndrome. I think being a female in music, I struggle a lot with feeling like I have something to prove. It’s not okay for me to just be good, I have to be great” Chubb said of the new cut.

BEKA ‘I’ll Be There’

Another artist making their debut appearance on New Music Radar this week is London-based singer-songwriter BEKA. Originally shared at the start of the month, BEKA’s ‘I’ll Be There’ is the uplifting tune you need to lead you into the weekend. Delivering a message of love and reassurance, BEKA’s vocals are effortlessly stunning against a backdrop of atmospheric pop, lifted by gorgeous harmonies and dynamic rhythms. Having previously performed with HONNE, ‘I’ll Be There’ is a breath of fresh air from an artist who is more than ready to take centre stage.

Just last week, Phoebe Bridgers announced she was starting her own imprint called Saddest Factory through Dead Oceans. Now we’re hearing Saddest Factory’s first offering of new music and it’s a dream-pop gem from rising star Claud. ‘Gold’ is about a relationship that’s not quite working out and it sees Claud refine the sound they’ve explored on earlier tracks, matching melancholic lyrics with bouncy synths and laid-back rhythms.

Swedish punks Viagra Boys announced this weekend that a new album was on the way. Slated for release on 8th January, ‘Welfare Jazz’ was also previewed with a snarling single called ‘Ain’t Nice’. Built on the same kind of grinding groove as their hallmark track ‘Sports!’, it’ an angry number that surges with energy,

All Things Blue ‘Legend of Chav’

LA dreampunk outfit All Things Blue have shared yet another preview track of their upcoming album called ‘Legend Of Chav’. It’s a clever track lulls us into a false sense of security with a drawn-out, subdued opening that soon explodes into action with a booming beat. A vibrant amalgamation of guitars and synths soon take over as India Coombs delivers the devilishly infectious hook line “maybe I’m just in your head” with a wink.

From what we’ve heard so far, The Cribs are getting quite introspective on their new album ‘Night Network’. The band’s latest single is no different, standing out for its brutally honest lyrics and emotive dual vocals. It’s another fresh and cathartic preview of the new album which suggests The Cribs are back doing what they do best.

Beabadoobee unveils her long-awaited second album ‘Fake It Flowers’ today and it’s already receiving rave reviews. Finding the sweet spot between 90s alt-rock and sweet melodic pop, one of its many highlights includes the thunderous ‘Together’. Capturing the honest and vulnerable feel of the album, it finds the singer longing for affection with anthemic choruses and heavy guitars. Bea says “This song is about the dependency you have with someone and missing that when you’re away and learning to be by yourself. It’s written from that point when you’re feeling alone and thinking everything is better when you’re with that other person.”

Inhaler ‘When It Breaks’

Dublin rockers Inhaler reach for the sky on their scorching new single ‘When It Breaks’. It’s an impassioned call to arms; a a response to the world’s growing disquiet towards the status quo. Full of surging, anthemic guitar-driven choruses, it’s a massively topical and anthemic return. “The lyrics and the music communicate the anxiousness of how we were all feeling and still are now a couple months later. It’s our interpretation of this strange and imperfect world we’ve come to live in,” the band said in a statement. “Things are gonna change and we are gonna be there when they do.