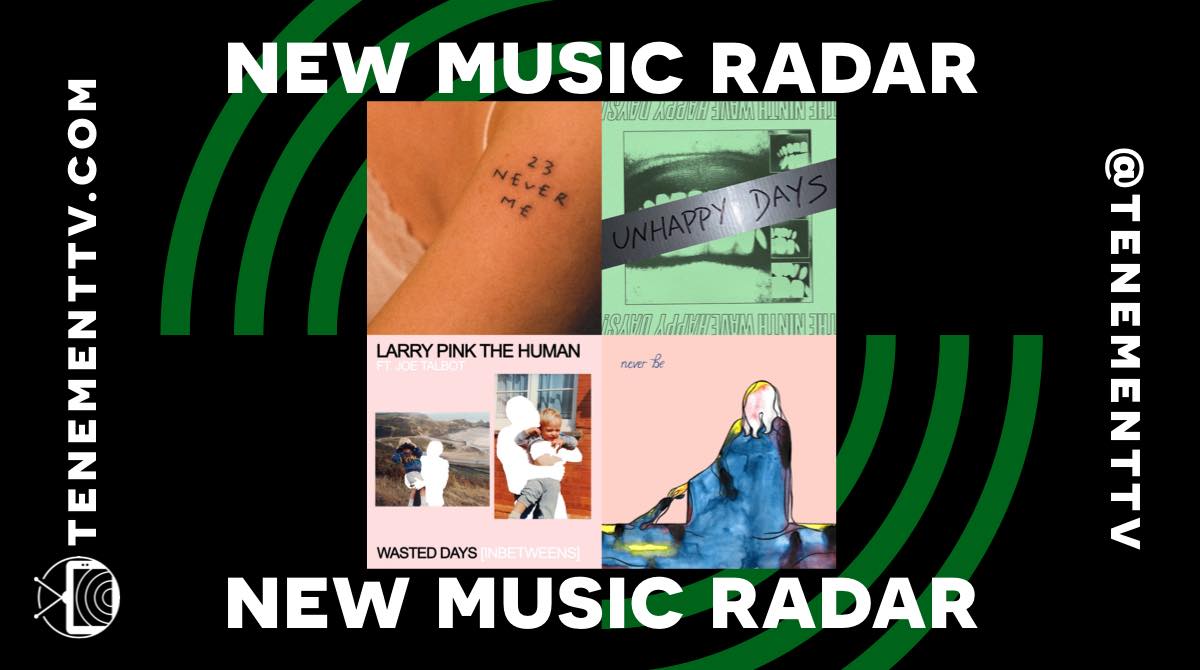 THIS week’s New Music Radar packs a punch. We’ve got tracks from Dead Pony, Weekend Debt, Slow Weather, LARRY PINK THE HUMAN, Matilda Mann and a brilliant collab between The Ninth Wave and The Twilight Sad. Check them all out and more below.

After kicking off the week with a nomination for ‘Best Rock/Alternative’ at this year’s Scottish Alternative Music Awards, Dead Pony are now thrashing into a new weekend with the release of a formidable new track called ’23, Never Me’.

It’s all about freeing yourself of toxicity and getting rid of the negative people in your life and the Glasgow outfit unleash all of their anger and disdain in the process. Beefing up their punk-pop sound with searing post-punk influences,  ’23, Never Me’ is a relentless menace of a song; ferocious and danceable in equal measure. Just when we think Dead Pony are at their fiery peak, they come back an even greater force than before.

Weekend Debt get reflective on their second single of 2020. The band have cited Vistas’ album as the inspiration behind their new indie-pop sheen as they unleash their catchiest chorus to date on new track ‘Pomposity’. Produced by Jamie Holmes in Chem 19 studios, it’s a light-hearted ode to failed relationships as they channel heartbreak into an upbeat and dynamic piece of indie-rock. After starting the year on a high note with a headline show at King Tut’s, the Lanark-based outfit have retreated back into their craft throughout lockdown, focusing in on the specificities of their songwriting and it shows on this latest release.

Following the release of their SAY Award shortlisted debut album ‘Infancy’ in 2019, The Ninth Wave have been nothing short of prolific. After sharing the strikingly minimalist yet wholly intoxicating ‘Happy Days!’ EP earlier this year, a collection that saw them push their sound into bold new territories and delve even further into the abyss, the quartet are now in the process of dropping revised versions of these tracks on a weekly basis for a new remix EP called ‘Unhappy Days!’. Having already teamed up with the likes of Mogwai, Dream Wife and Working Men’s Club, the latest remix arrives from none other than Andy Macfarlane of The Twilight Sad who offers his own take on the EP’s title track ‘Happy Days!’. The sparse, mechanical arrangement is transformed into a new beast entirely by Macfarlane; it becomes a dark, merciless onslaught of sorts as he revives the harsh, menacing rhythm section of the original and turns it into an industrial dancefloor-filler. By just chopping up the original stems that were given to him and feeding them through a cassette recorder, we are left with a compelling and invigorating take on the track.

With their debut EP slated for release on 13th November via Last Night From Glasgow, newly-formed duo Slow Weather have shared its beautiful title track ‘Clean Living’. Comprised of Chris McCrory of Catholic Action and Edinburgh singer-songwriter Annie Booth, there’s a timeless quality to the duo’s writing they pair existential lyrics with lush arrangements to great effect. It’s a gorgeous slow-burner, their two voices intertwined as the track builds to a gloriously atmospheric finale.

Scottish duo Vukovi are back with ‘SLO’, their first new single since the release of their second album ‘Fall Better’ earlier this year’. ‘SLO’ is an absolute powerhouse of a track; Janice Shilstone magnetic from beginning to end over howling choruses, icy synths and pummelling rhythms. Continuously pushing themselves beyond the confines of a conventional rock group, it’s an intoxicating mix of heavy alt-rock and electro-pop that comes armed with hard-hitting lyrical content.

Shilstone says “SLO is comparing my OCD to an abusive relationship. You have a warped outlook on what healthy behaviour is. You forget what it’s like living a normal life. It has this god like status that makes you believe you wouldn’t survive if it was ever to leave you. You have a toxic reliance on it and in your eyes that condones reckless behaviour.”

Recently formed duo LARRY THE PINK THE HUMAN have teamed up with IDLES’ Joe Talbot for their contemplative new single ‘WASTED DAYS [INBETWEENS]’.. Laurie Vincent’s new project have released a series of singles this year such as ‘LOVE YOU, BYE’ and ‘MIGHT DELETE LATER’ which have received critical acclaim for their soft, nostalgic soundscapes and meaningful lyrics. This new offering continues much in the same vein- it’s a pensive, synth-heavy number about embracing the simple things in life. Armed with a big, emotional chorus, it showcases a different side to both Vincent and Talbot.

They say it’s about “missing the beauty in the everyday. In the rush to reach our destinations how we can often lose sight of the joy in our journeys. An awakening. Doing nothing at all is something very special.” Talbot adds “Joe Talbot adds, “It’s a track about not knowing the magic ‘til the magic is behind us.”

Oscar Lang ‘Attitude to Being Bored’

Oscar Lang shifts things up a gear on his bold new single ‘Attitude To Being Bored’. A far cry from the guitar-pop we heard on his ‘Hand Over Your Head’ EP earlier this year, this new track is a bolshy piece of stadium-rock that beefs up his sound tenfold. With Britpop influences galore, there’s also a dark, cosmic edge to the track as it drives forward relentlessly in fuzz-fuelled glory.

Signed to the same label as Glasgow’s Lizzie Reid (Seven Four Seven Six), Matilda Mann has a brilliant ability to transport listeners to a faraway dreamland with her soft-voiced indie-folk songs and spellbinding lyrics. Her latest track ‘Japan’ is a sweet, tender track about escaping to a far-flung location to get over someone. All wistful and romantic, it’s the kind of soft, acoustic track we’ve come to love from the young singer-songwriter that oozes warmth and familiarity,

She says “Over lockdown I binge-watched Gossip Girl. It’s basically about very rich teenagers living in NYC and whenever they were heartbroken, they would always fly off to Paris or do something extravagant and I thought, if I was 17 and heartbroken (and rich), I’d fly to Japan to cry and distract myself until I got over them.”

South London-based outfit Bleach Lab returned this week with a stunning new track called ‘Never Be’. Detailing the heartbreaking aftermath of a break-up, the track sees Jenna Kyle deliver a delicate, heavenly vocal over calming guitars and slow, methodical drums. With its enriched soundscapes and heart-on-sleeve lyrics, ‘Never Be’ effortlessly sweeps over you, drifting somewhere between sleep and consciousness as Kyle’s vocals coalesce with the soothing instrumentation to create something even more celestial.

Be Charlotte ‘Back To Life’

Clearly galvanised after the release of her debut EP ‘Dreaming With The Lights Off’ earlier this year, Be Charlotte’s new material emanates pure positivity and after delivering a powerful, unifying message on ‘Set Somebody Free’, she’s back with the equally vibrant ‘Back To Life’. Known for her introspective lyrics and dynamic pop arrangements, the new track is all about finding strength and overcoming personal barriers with the help of an other. Produced by Phil Cook (Lewis Capaldi, Jess Glynne, Little Mix), Be Charlotte reinforces her pop credentials with each release and this latest offering finds her reaching for the stars.

Returning with her first piece of new music in over a year, Jade Bird unveiled the joyous ‘Headstart’ this week. It’s an uplifting slice of Americana that captures the enticing energy of early romance. Born after a trip to the States in which she shared the stage with songwriting legends Dolly Parton, Sheryl Crow and Maggie Rogers, there’s a sunny, breezy feel to the track as she says “”‘Headstart’ came out of a trip I made to upstate New York at the beginning of the year. It’s quite a light-hearted song, about liking someone who just can’t see the signs, and releasing it feels like a way to give a bit of joy to the end of the year. It feels like community to me, and it makes me want to sing again.”

With the news that they have just signed to Sub Pop, London’s TV Priest have pushed their highly anticipated debut album ‘Uppers’ back to February 2021. Not to worry though as the band have been treating to us a string of incendiary preview singles over the last couple of months, the most recent being the brilliant ‘Decoration’. Staying true to the band’s irreverent sense of humour, the band offer up a series of vignettes on modern daily life with Charlie Drinkwater taking aim at feature walls, avocado, TV adaptations junk food over a jagged punk groove. Full of angular guitar hooks and ferocious hooks, it has us on tenterhooks for that debut album.

Be Charlotte 'Back To Life'