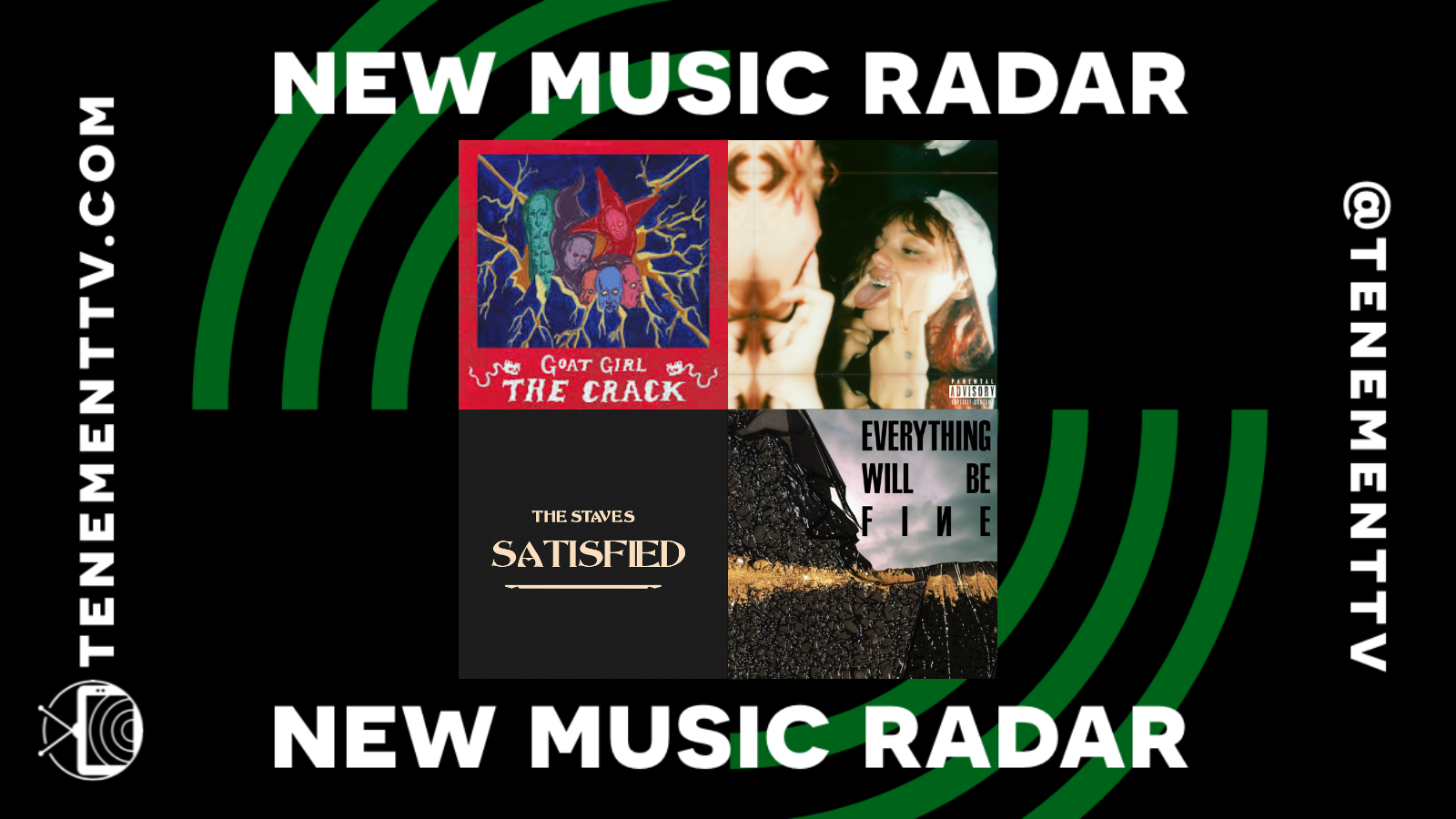 THE Scottish music scene is firing on all cylinders this week with a string of exciting releases from artists such as The Ninth Wave, The Vegan Leather, Alex Amor, Gallus, Pelican Tusk, Glasvegas, Hannymoon, CHLOBOCOP and more.

‘Everything Will Be Fine’ is the message from The Ninth Wave as they round off a truly remarkable year in a blaze of euphoria. Just when you think you’ve pinned the Glasgow four-piece down, they come back and surpass expectation once again – this time to deliver a raw, undiluted message of hope that aims straight for the heart and doesn’t miss.

‘Everything Will Be Fine’ takes the very best parts of their recent ‘Happy Days!’ EP and their SAY/AIM nominated album ‘Infancy’ and brings them together in one big cathartic blow-out. With raw, intimate emotion at its core, Haydn Park-Patterson aches and yearns over a towering instrumental; Millie Kidd’s soft vocals the perfect complement to his raw vulnerability over looming electronics, driving rhythms and shimmering synths. Building to an almighty goosebump-inducing climax, it’s an  absolute triumph of a track that and a gloriously euphoric way to end the year.

After making an exhilarating return with ‘Gloaming’ at the end of October, a track which has since gone onto gain the support of Radio 1’s Jack Saunders, The Vegan Leather are back with another much-needed dose of disco-fuelled guitar pop called ‘Sanctum Sound’. While ‘Gloaming’ saw them explore a more expansive and engulfing sound, ‘Sanctum Sound’ is loaded with lockdown claustrophobia and locks into an incredibly tight groove from the get-go.

Built around a popping bassline, the charismatic vocal interplay between Gianluca Bernacchi and Marie Collins returns to the forefront as they explore themes of physical and personal space over a dense array of percussive beats and synth/guitar stabs. Not just your standard lockdown anthem, it’s a track layered with hidden meanings and testament to how ferociously inventive The Vegan Leather are, even when confined to their bedrooms.

Gallus ‘What Do I Know’

Despite a lack of live shows, 2020 has been a standout year for Gallus who have continued to expand their musical boundaries in a refreshingly bold and uninhibited manner. Following on from the incendiary ‘Marmalade’, the Glasgow outfit are back with ‘What Do I Know’; another dynamic slice of indie-rock full of punchy guitar hooks and biting lyrics. Brimming with that trademark urgency, it’s another masterful example of the band’s ability to explore important themes such as mental health through an intense blast of punk-fuelled indie-rock.

With no live shows for the forseeable, the band are encouraging fans to download ‘What Do I Know’ on Bandcamp for a very small fee. It is also being sold on the platform as part of an exclusive collection featuring ‘Marmalade’ and two live tracks.

Another exciting release to come out of Scotland today, Alex Amor has shared a new preview of her upcoming ‘Love Language’ EP which drops on 15th January. On ‘Motion’, Amor finds the silver lining in ephemerality as she delivers her thoughtful ruminations over a bright modern pop production. She says “There’s a melancholy to the impermanence of everything but it’s also incredibly freeing – and I wanted to capture that idea in a song. Motion is something we can either flow with or against, and I’m learning to accept that the only thing we can rely on is that nothing stays the same.”

Pelican Tusk ‘Not What You Meant’

Pelican Tusk established themselves as one of Scotland’s most compelling emerging artists earlier this year with the release of their debut EP  ‘Rhubarb’s House’. Marked by its completely liberated approach to structure and genre, the EP highlighted a band boldly unafraid to take risks, channelling a tender vulnerability and deep-rooted melancholy through endlessly inventive instrumentals and unpredictable song structures. The five-piece continue down this experimental route on new single ‘Not What You Meant’ which opens in madcap fashion with an electrifying display of guitars and cascading drums before settling into a more familiar, considered groove. With Sam Bancroft’s soft, bewitching vocals surrounded by moody melodies, slinking basslines and subtle female harmonies, the band begin to evoke ‘Tranquility Base’ era Arctic Monkeys before jumping into a grungy, guitar driven chorus that’s easily their most emphatic to date. Peppered with ideas from start to finish, it’s a track that taps into a more hopeful state of mind; one that hopes and yearns for better.

They said “At its core this song is about wanting to be a better person. It’s also the song I’ve rewritten the most, the final version its probably the 10th draft of lyrical and musical changes. Each draft of the song added another layer and meaning to the song. To me now, the song touches on the internal and external perspective of wanting things to be better.”

Glasvegas ‘My Body is a Glasshouse (A Thousand Stones Ago’

Glasvegas have given us a second preview of their upcoming fourth album ‘Godspeed’, out in April 2021 via their Go Wow label. Described as the album’s most powerful moment, ‘My Body is a Glasshouse (A Thousand Stones Ago)’ tells the story of a tragic young protagonist whose “innocence is a footnote” and whose “soul is scattered somewhere below”. Driving forward to the beat of a Spector-esque snare, James Allan’s lyrics may form a fictional narrative but he emotes from deep within, wearing his heart on his sleeve against a devastating backdrop of shimmering shoegaze guitars and rousing piano melodies. So all-enveloping and heavy with emotion, it’s another sign that Glasvegas are back to their devastating best on their forthcoming album.

Among the leaders of a new vanguard for Scottish hip-hop, Hannymoon’s debut album Blood On Soap and shows the length and breadths of his talents. While the entirety of the project makes for a riveting immersion into his world, we’ve pinpointed “Let It Go” as our personal standout. All crystalline trap production and trunk-rattling bass, Hanny’s idiosyncratic flow eschews any notion of whah homegrown hip-hop would typically represent to tread into the realm of the Young Thug’s, Playboi Carti’s and Lil Baby’s of the world. Self-assured and evidently harbouring larger ambitions, the record one that’ll broaden horizons and signpoints the arrival of a new force in Scotland’s musical eco-system

Rising Glasgow star CHLOBOCOP shows her tender side on new track ‘It’sNotOver’. After re-emerging with the Lee Scott-assisted ‘BELL ME BACK’ earlier this year, ‘It’sNotOver’ is CHLOBOCOP at her most intimate; her quietly emotional vocals delivered over hip-hop beats and subtle pop melodies. Full of atmosphere, it’s a restrained return from the rising star that finds her treading new ground.

Greentea Peng has rounded off her year with the soul-stirring ‘Spells’. Written around the time of her debut EP ‘SENSI’, it’s a track about honest self-discovery and embracing yourself over looping jazzy melodies and driving percussive beats. A rich fusion of R&B and electronica, it’s a hypnotic listen.

South London’s ENNY has teamed up with Jorja Smith for the ‘Peng Black Girls Remix’. Originally released back in October, the track is a joyous celebration of individuality and black womanhood, delivered over soulful keys and low-key drumbeats. A real statement of empowerment defined by ENNY’s incisive lyricism, Jorja Smith lends a whole fresh new vibe to the track with her instantly recognisable angelic vocal tone.

Goat Girl’s new track “emerged from an imagined post-apocalyptic world whereby people flee into space for a new life on an unruined planet, as the result of the pillaging of Planet Earth.” It’s an appropriately surreal affair that keeps you on your toes, shifting between rhythmic cowbell-heavy sections and otherwordly parts full of cosmic synths and sweeping psychedelia. It’s all very dark and ominous.

The Staves have shared a third single from their upcoming album ‘Good Woman’. It’s a gentle slow-burner that starts quietly but gradually builds into a perfectly-harmonised burst of emotion, the gorgeous musical arrangement expanding alongside them with cascading synth lines and a rousing guitar solo. It’s a stunning, all-enveloping insight to the new album.

We’ve already heard ‘Alphabets’ and ‘Water in the Well’ from Shame’s new album ‘Drunk Pink Tank’ and today the band have are back with another preview. ‘Snow Day’ is a massive statement of intent from the London punks and perhaps the most striking example of the more expansive sound they’ve spoken of in interviews. Driven by a constant tension and propulsion, there’s a real dark intensity to the track as it twists and turns to its epic five minute runtime.

Charlie Steen says “A lot of this album focuses on the subconscious and dreams, this song being the pivotal moment of these themes. A song about love that is lost and the comfort and displeasure that comes after you close your eyes, fall into sleep, and are forced to confront yourself.”

The Ninth Wave 'Everything Will Be Fine'