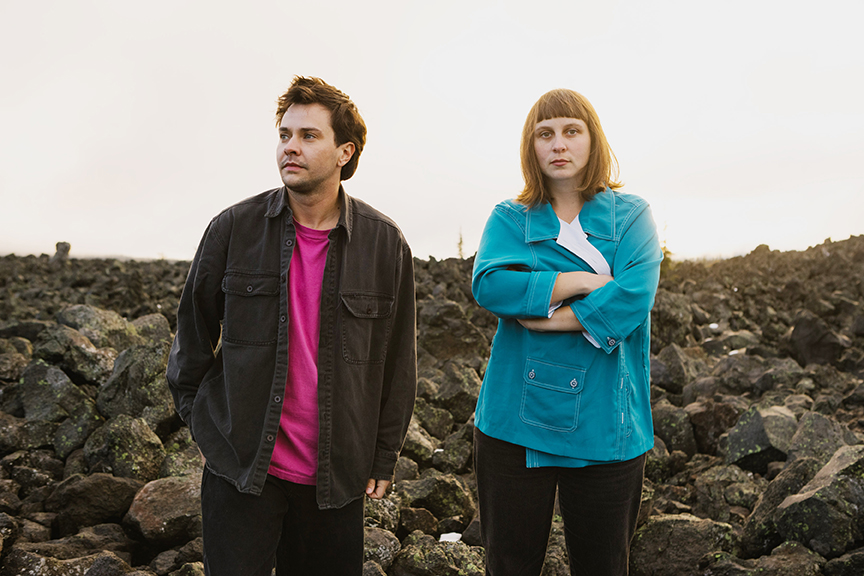 FOUR years on from their acclaimed debut album ‘Constant Image’, Washington DC punks Flasher have cruised back into our live with news of its follow-up record ‘Love Is Yours’.

Slated for release on 17th June via Domino, the album marks a new chapter for the group – instigated by the departure of bassist Daniel Saperstein which reduced them to a duo, and ultimately caused them to recalibrate their songwriting process and push the parameters of their sound.

Teaming up with long-time friend Owen Wuerker in D.C., it proved a liberating experience that has allowed them to build on the post-punk frenzy of their debut and explore their love of pop melodies and hooks while retaining their DIY roots.

So far, we’ve heard ‘Sideways’ and the title track from the new album – the former more groovier and chilled out then we’ve previously heard and the latter fully leaning into their groove, dance-ready stylings. With the album campaign now well underway, we caught up with the band to hear about the new material, new band dynamics, their relationship to art and much more.

Can you tell us about your recent single ‘Love Is Yours’ – what inspired it, what is it about?

‘Love Is Yours’ is about the roller-coaster highs and lows of a long-term relationship—the kind where a conversation can feel like a tripwire, with subtextual clues that offer the promise of reward if correctly decoded. We both love Arthur Russell and I would say his songwriting was an influence on this one. He has a way of blending off-kilter melodies, direct yet poignant lyrics about love, and elements of dance music. I think we tried to filter some of those elements through our own lens when writing this song.

You’ve got a new album coming out – how has your sound evolved since your debut?

After the release of our first record we set off on a heavy touring cycle which ended in a band implosion, and resulted in us becoming a two piece. We found ourselves having to radically reimagine what the band could and should be. When we started demo-ing the goal was simple: write songs that came intuitively, and create a space of trust, exploration, and openness. The tastes of the band have always been much broader than just “post-punk”, and the line-up change was kind of a dramatic catalyst for reinvention. Prior to this record, the two of us had taken a backseat when it came to recording and production. This time around we were learning to engineer throughout the demoing stage and using the recording process to write, working with loops and drum machines as opposed to playing together live. Emma stepped into a new role not only sharing the lead vocals, but also as a multi-instrumentalist. The resulting songs are a juxtaposition – the music reflects the exaltation of the new dynamic and certainty and confidence in each other, while the lyrics are darker and more introspective.

Can you tell us about the recording process of the new album?

We recorded ‘Love is Yours’ with our longtime friend and collaborator, Owen Wueker, in his home studio in Washington, D.C. We lived with Owen for a month and took our sweet time recording since we had all been laid off from our jobs at the start of the pandemic. We had basic foundations for most songs on the album when we went in to record but ultimately did the bulk of our lyric writing, vocal arranging, and rhythm section writing while we were in the studio. Contrary to what one might think, working in a familiar environment like Owen’s home (his studio is also our former practice space) proved to be liberating and inspiring, as we were allowed what felt like infinite time to experiment with each song.

What was inspiring you at the time of writing and recording?

At the time of writing and recording we were listening to a lot of No Joy, Daisies, Lily Konigsberg, Cate Le Bon, Grace Ives, Virginia Wing. We also had the all-time favorites in rotation as well of course – Arthur Russell, Lucinda Williams, Kate Bush, Broadcast, Elliott Smith, Beach House, MBV, Air, just to name a few.

What are the running themes of the album?

Learning to love and forgive your younger self. Fighting for important relationships and allowing the ones that don’t serve you to fade into the background.

How has the dynamic of the band changed now that you’re a duo? What positives have you taken from this and what challenges has this posed?

Trios are magic but someone is always going to feel left out. Now that we are a duo it feels more important than ever to be attentive and caring with one another, but it also feels easier than ever before. The writing process has also felt more relaxed as a duo, I think because we are both so open minded and supportive of each other’s ideas.

Now that we are both “front people” we are having to rethink our live performance. We’ll be touring as a four piece for the first time, and Emma is going to step out from behind the kit and play bass and guitar in front of an audience for the first time ever, which is exciting and scary!

The artwork of the album is very striking. Can you tell us a bit about this?

Thank you! Some of our favourite album covers are hand drawn or hand painted – “Little Creatures” by Talking Heads (Howard Finster), “Genius Of Love” by Tom Tom Club (James Rizzi), “Danger” by The Lijadu Sisters, and all of Mingering Mike’s imaginary albums. We knew we wanted something in a similar vein for this record, cover art that feels like a dense and immersive world you can get lost in while you’re listening to the record. The album art was painted by NYC based artist Em Aull who describes his work as “equal parts Hieronymus Bosch and Richard Scarry” which fit the bill perfectly. He completely understood the vision and knocked it out of the park. When he agreed to paint the art his only stipulation was that there had to be a cop dying in the art somewhere, which we fully supported. There are tons of Easter eggs in the album cover—our cats, stills from YouTube videos he was watching, a couple getting freaky, and even the two of us on a jetski.

You’ve embraced numerous artistic collaborations before. How do you choose who to collaborate with? Why do you feel it’s important to have a strong visual to accompany your music?

Collaborating with other artists is one of the best parts of playing music. It’s so rewarding to watch a riff or idea completely transform in the hands of another person – to see the way they interpret what you’ve done and take it a step further or somewhere totally unexpected. Usually we collaborate with friends, or friends of friends. The band’s visual identity has always been intrinsically tied to the music. I (Taylor) am a graphic designer and have made almost all of the art for Flasher (flyers, t-shirts, album art etc.). The art for the band has always just been another part of creative expression. It’s fun making art for your own band because you don’t have to worry about anyone else’s taste. Most of the time I’m designing for myself—something that I would want to wear or have on my shelf. That said, it was really awesome to have a vision for this artwork and have someone else bring it to fruition. We just love Emmy’s work so much and feel honored to have it visually represent our music.

What are your plans for the year?

We’ll be touring the East Coast + Midwest in June and then heading out to the West Coast in September. It’s still such a strange time to be touring but we’re really looking forward to being back on the road. Hopefully we make it out to Europe soon! Other than that our goal is to make another record by the fall.

Photo by Will Matsuda