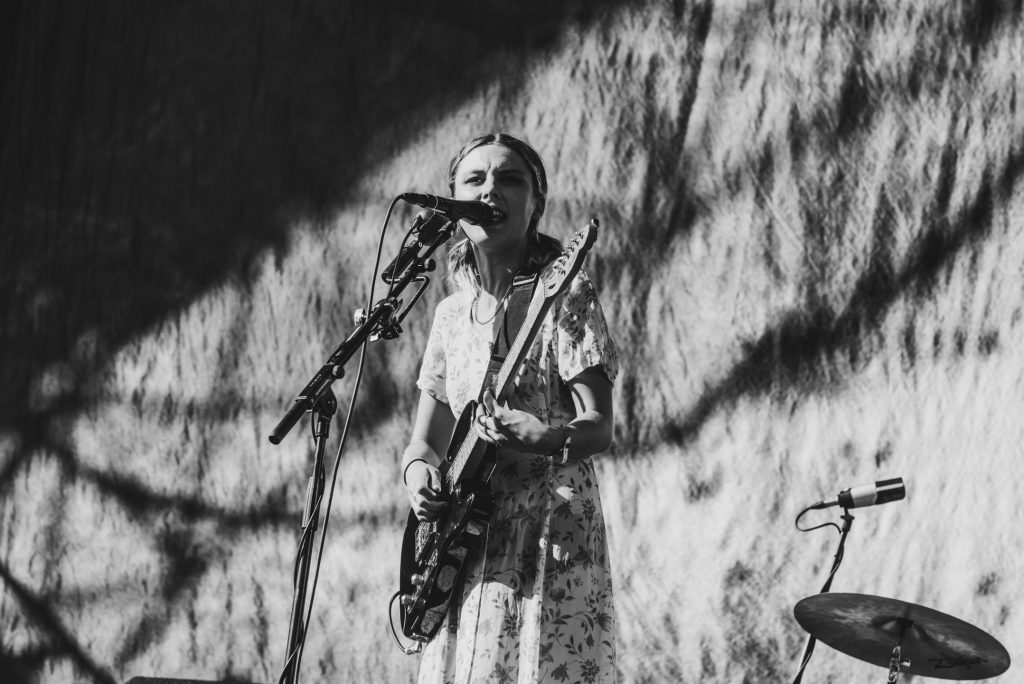 WHEN Radio 1 DJ Clara Amfo announced Wolf Alice as the winners of the 2018 Mercury Prize on Thursday night, few people will have been as surprised as the band themselves who were just about speechless as they went up to collect their award.

“It means so much to pick this up with my three best friends,” said a visibly overwhelmed Ellie Rowsell. Bassist Theo Ellis jumped in to recall their first encounter with a record label who sneered at their lack of identity: “’You don’t look like a band at all. What are you? What are you supposed to be? All your songs sound different. You don’t look like each other…We never really figured it out, but here we are. So fuck you!”

For an award which has traditionally rewarded cult concerns and shone a light on innovative marginal artists, a band who were big enough to headline the Radio 1/NME Stage at Reading & Leeds this year aswell as reach Number 2 in the charts with their nominated album ‘Visions Of A Life’ perhaps seems like a safe choice if we look back at previous shortlists.

This year’s list had been criticised for being too mainstream; and rightly so. With only two debut albums included, the likes of Arctic Monkeys, Noel Gallagher’s High Flying Birds, Florence and the Machine and Lily Allen were up for the award which shortlisted seven top ten records and six previous nominees. Compared to previous years which had, believe it or not, been chastised for being too diverse, judges were met with a substantially less eclectic group of artists this time around; there was no one representing folk, hard rock, modern classical or dance; nothing avant-garde and no real curveballs.

But then there has always been a vagueness about the Mercury Prize; an award which has never honestly defined its terms. Is it one based on artistic achievement, consolidated brands or is it designed to provide a platform for more leftfield artists? And at what point does it become a process of mere edification for the critical elite?

“I don’t think the award has any duty to any one sector of the industry or the other,” said Jeremy Pritchard, bass player for fellow nominees Everything Everything. “Contrariness is part of its identity.”

The more mainstream focus this time around can perhaps be attributed to a judging panel which contained fewer critics, more mainstream radio broadcasters and popular artists. Meanwhile, the cynical faction of music fans among us would highlight the fact that the organisation who previously ran the prize was taken over by BPI, the same people who run the Brits; the very awards that the Mercury was set up to be opposed to. It’s a strange shortlist for a year that has seen so many game-changing debuts and risk-taking albums; Shame, Dream Wife, Goat Girl, Let’s Eat Grandma, Young Fathers, Sophie and Hookworms all come to mind.

The bookies’ favourites this year were two of the lesser known outfits; jazz group Sons of Kemet for the triumphant ‘Your Queen is a Reptile’ and Nadine Shah, whose deeply thought-provoking third album Holiday Destination tackled challenging themes such as Brexit, refugees and the state of modern politics. Living up to its reputation as a platform for underground talent, Sons of Kemet have seen the biggest surge in interest since being nominated with their album sales up 50%; proof that it’s these leftfield artists who benefit the most from being shortlisted, whether winning or not. As Nadine Shah bluntly put it before the ceremony: “I need that 25 grand a lot more than a lot of the others. Let’s be crude about it, Noel Gallagher would just buy a pair of trousers with it.”

So while these albums may have fallen more naturally in line with a ceremony that has in the last two decades awarded its top prize to drum’n’bass (Roni, 1997), Asian underground (Talvin Singh, 1999), grime (Dizzee Rascal and Skepta, 2003 and 20016) rap and hip-hop debuts (Ms Dynamite, 2002; Speech Debelle, 2009; Young Fathers, 2014) aswell as original songwriters like Benjamin Clementine (2015), the win is every bit as important for Wolf Alice; an indie-rock outfit who have inspired a generation with their epic yet intimately crafted songbook.

With all their widespread critical acclaim, devoted fans and decent chart success, they may be deemed a safe winner; but they’re a hugely deserving one at that. Finding themselves somewhere between the mainstream and the newcomers, they didn’t win the Mercury Prize because they sold a record number of albums, initiated a cultural movement or won a significant amount of cool points; they did so because they’re a brilliant band who made an outstanding album. Their victory is one of hard work, authenticity and gritty determination. Not only that, but it’s a victory for indie-rock itself.

For a band of their ilk to win an award that is largely synonymous with cutting-edge innovation, it’s a sign that the genre is still hugely relevant; despite what the naysayers believe. Rock music didn’t just lay down because critics grew tired of noughties indie-rock. Across two albums, Wolf Alice have shown what can be done as a guitar band; they’ve challenged the genre’s boundaries, rewired and stretched them into a glorious amalgamation of its finest moments. We’ve championed them from beginning; from playing as a folk duo in bars to triumphant headline sets at the Barrowlands and London’s Alexandra Palace to festival main stages. And they’ve done so in an age when guitar music is no longer ruling the roost; when it’s nigh-on impossible for an indie-rock outfit to break into the singles chart thanks to streaming and radio playlisting.

The album itself, which rather presciently topped our records of the year list at the end of 2017, has been described by the Mercury judges as “an exuberant tapestry of swirling pop, grunge and indie guitar rock” or as the band put it: “We’re too pop for rock and too rock for pop.” It may not be a wildly innovative record, but Visions For A Life takes the experimentation, curiosity and eclectic palette of their critically acclaimed debut My Love Is Cool and pushes them even further; a shift that has marked their growth from ‘best new band’ to quite simply ‘best band’, full stop.

Textured, varied and wide in scope, it’s an album that opens with the dense shoegazey sounds of ‘Heavenward’ before shifting into the ferocious, punky and expletive-ridden ‘Yuk Foo’. It’s a patchwork of sounds and textures that’s seamlessly put together from start to finish. ‘Planet Hunter’ is dreamy and introspective, ‘Don’t Delete The Kisses’ is a blissed-out synthpop wonder, ‘Beautifully Unconventional’ is a tight, groovy pop song and the album’s title track is a sprawling eight-minute giant that comes in three episodic parts. They may draw from a wide range of influences; but they’re success lies in their ability to bring so many styles together in a coherent design full of heart and soul.

This has a lot to do with Ellie Rowsell who has developed into a commanding and charismatic frontwoman. With a voice that has the ability to effortlessly shift from cool and ethereal to a furious howl, her intriguing, poetic lyricism has struck a chord with a devoted generation of fans for whom she has now become a strong and outspoken role model.

In the aftermath of their win, you sense that Wolf Alice are a band who are only going to get better and better. Definite headliners of the future, their potential feels limitless with a feeling that the best is still to come from the four-piece.

Their victory may not come as a massive surprise; but the Mercury Prize doesn’t really deal in that anymore. For an award which claims its main objectives are “to help introduce new albums from a range of music genres to a wider audience”, it’s odd that they would shortlist the Noels, Arctic Monkeys and Florences of the world in favour of some fresh, underground talent. It’s a sign of the growing chasm that exists between the Mercury’s back-slapping industry and the abundance of exciting new musical talent that exists in the UK. Perhaps, it’s time for a reinvention.

TTV GUEST POST: A tribute to the trailblazer that was Dale Barclay