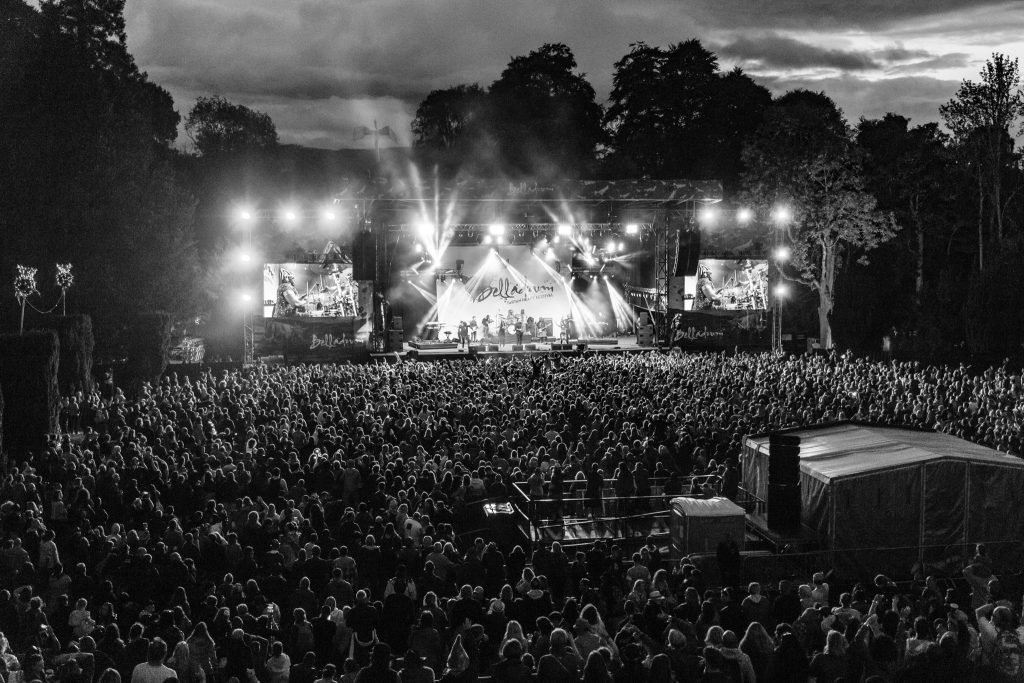 NEXT week marks the return of one of Scotland’s most treasured music festivals, the Belladrum Tartan Heart Festival. Almost a guaranteed sell-out every single year, the event has established itself as one of the most eagerly anticipated events on the Scottish festival calendar, attracting thousands of music fans each year with its eclectic line-ups and carnival atmosphere. Situated in the idyllic surroundings of Beauly in the Highlands, organisers are once again celebrating a sold-out event with yet another brilliant line-up featuring appearances from none other than CHVRCHES, Lewis Capaldi, Jess Glynne, Johnny Marr and more alongside an array of breakthrough acts and burgeoning local talent. With that in mind, TTV have compiled a list of the acts you won’t want to miss over the weekend

Since releasing their debut album in 2013, the Glasgow-based trio fronted by Lauren Mayberry have become one of the nation’s biggest musical exports, taking their catchy, glistening brand of electronic-pop to cities all over the world. 2018 saw them release their critically acclaimed third album ‘Love is Dead’, showcasing hits like ‘Get Out’ and ‘My Enemy’. Having recently played to 13,000 people at a sold-out SSE Hydro, they are more than equipped to headline this year’s Belladrum.

It’s fair to say that it’s a massive coup for Belladrum to have secured man of the moment Lewis Capaldi for this year’s festival. Having just played a triumphant homecoming set at TRNSMT Festival last week, he is sure to receive another hero’s reception when he journeys up north to the Highlands for one of the most eagerly anticipated sets of the weekend. Expect to hear lots of heart-breaking anthems from his chart-topping debut ‘Divinely Uninspired to a Hellish Extent’ aswell as plenty of self-deprecating humour from the social media phenomenon.

In the midst of a very busy festival season, Johnny Marr will go down a storm with indie fans at Bella 2019. The lead guitarist of The Smiths is known to delve into his old band’s back catalogue now and again while his own solo material has proved that the indie legend is still very much at the top of his game.

American hip-hop legends will provide a welcome blast to the past at Belladrum. Known for bringing the genre its first mainstream success with the smash hit ‘Rapper’s Delight’ in 1979, the group released several more hits including ‘Apache’, ‘8th Wonder’, ‘Rapper’s Reprise (Jam Jam)’ which is a sequel to their debut hit, and ‘Showdown’ which featured the Furious Five. Still touring all over the world, they are destined to be a big festival hit.

SOAK – aka Bridie Monds Watson – released the follow-up to her multi-award winning 2015 debut album Before We Forgot To Dream earlier this year. Grim Town saw her expand her songwriting both lyrically and sonically, tackling everything from long-distance love, anxiety, depression to the changing political landscape all while subtly building on the charm of her debut with a brighter pop palette.

Self-Esteem is the new all-singing, all-dancing project of Rebecca Taylor. After working years on the indie circuit as a member of Slow Club, Taylor has found a new lease of life and has plenty of big, bombastic pop tunes in her arsenal. She released her debut solo album earlier this year to widespread critical acclaim.

A year after inking a deal with Sony/Columbia, Be Charlotte has jumped back into the limelight this year with two stunning singles ‘Do Not Disturb’ and ‘Brighter Without You’. Retaining the thoughtful introspection and unbridled creativity that made her such a hot prospect in the first place, the future certainly looks bright for the Dundee singer if these glimmering pop creations are anything to go by.

Goth-pop duo The Ninth Wave have earned a reputation as one of the nation’s most exciting emerging outfits. Having toured all over the UK and Europe this year, they have developed into a formidable live act and their Belladrum show is not to be missed. Combining a fascination for eighties post-punk and glistening goth-pop, they released their debut album Infancy Part 1 earlier this year with the second half expected later this year.

A band who seized our attention from the very moment they burst onto the scene a few years ago, Edinburgh’s Man of Moon announced their return earlier this year with the release of ‘Ride the Wave’ and ‘Skin’. After biding their time to hone their sound, the duo have re-emerged more visceral than ever and their return has certainly surpassed all expectations. Bringing together the disparate sounds of kraut rock and sprawling post-punk, their live show is known to be a sublime sucker punch to the senses and a deeply compelling audio-visual experience.

Armed with plenty of fizzing indie anthems and infectious, bouncy melodies, Vistas are a band made for festival season. Racking up millions of streams for massive tunes like ‘Tigerblood’, ‘Retrospect’ and ‘Calm’, the four-piece have resonated with a new generation of indie fans and their rapid ascendency shows no sign of slowing down.

Having gained notoriety for their dramatic and often unpredictable live shows, Walt Disco’s sound is a striking amalgamation of crooning vocals, angular guitars and dark shimmering synths. Driving and lurching their way through glimmering 80s New Romantic and biting post-punk in wholly unique fashion, the five-piece are a glossy, vibrant addition to the Scottish music scene and shouldn’t be missed.

After months of slow-building hype, Aaron Smith finally unveiled his debut track last week and it certainly lived up to all expectation. With an extraordinary voice that has the ability to stop you dead in your tracks thanks to his incredible range and beautiful falsetto, ‘Unspoken’ has been the perfect introduction to an artist who is seemingly destined for very big things indeed.

With only two singles to their name, Edinburgh’s Swim School have certainly made their mark in recent months. Led by the incredible vocals of Alice Johnson, their shimmering, brilliantly infectious indie-pop sound recalls the likes of Pale Waves, Wolf Alice and more and they are sure to win over many more fans at Belladrum with a set on the Seedlings Stage.

Van Ives have blown us away with every spellbinding live show to date. With an increasingly impressive run of material behind them already, Stuart Ramage and Roan Ballantine have carefully crafted a sound that is as uniquely sumptuous and sublime as it is innovative and unpredictable. Ramage’s incredible vocals have the power to hold any crowd to a standstill and they are paired wonderfully by Ballantine’s transcendent production, full of electronic swells and waves of neo-soul.

Quiche’s head-bobbing, heavenly sound is an artistic take on the intricate sounds of shoegaze, blending heavy choruses with swooning verses. After a promising 2018 which saw them take part in our very own TTV Discover tour, the band will win over even more fans with their unmistakable creativity on the Seedlings Stage.

After making a lasting impression at this year’s XPO North, it’s no surprise that Edinburgh-based duo Chuchoter have found their way onto the Seedlings Stage this year. Emerging from Edinburgh’s underground the duo blend pop vocal melodies with precise, striking synthesis. Inspired by a mix of modern pop and disco, their deep-soul vocals, strong lyrics and dirty production create a fresh sound with a club focus; an enthralling combination that makes for a transfixing live experience.

Known to deliver a set that is as powerfully spellbinding as it is playful and humorous, Scarlett Randle has developed into a truly captivating performer over the last 12 months. With an ability to oscillate between minimalist folk and striking pop, her exuberant cover of ABBA’s ‘Dancing Queen’ has become a calling card of her set in recent times but it’s her own original material and heartfelt lyricism that continue to stand her apart from her contemporaries.

Everything you need to know about Edinburgh Summer Sessions