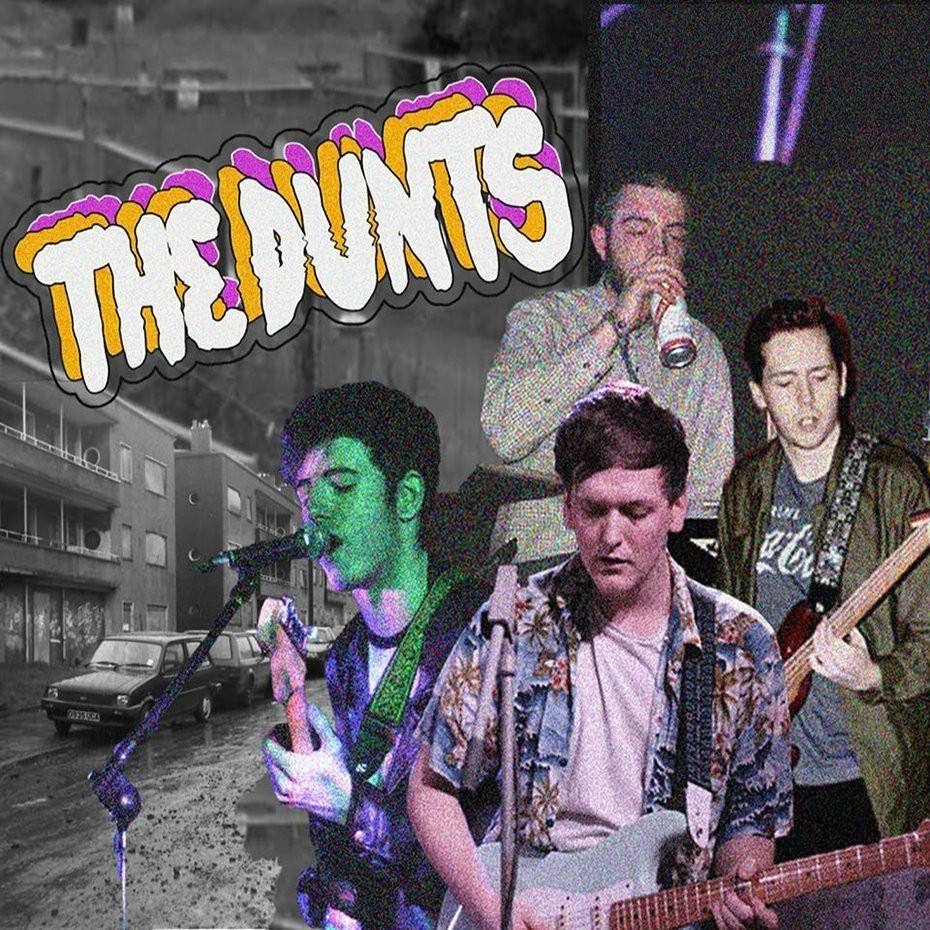 SPAWNED from a group of like-minded individuals that held a kinship through shared tastes in their formative years, the tale of how The Dunts came to be is perhaps atypical of most bands but what most definitely isn’t so pedestrian is their music . Raw, frenzied and stimulating tales of unabashed weekend hedonism and its stark aftermath set to a soundtrack that’s informed by a devotion to The Libertines, The Strokes and the anarchic forefathers of  punk rock, they are a thrilling proposition both on record and before your eyes in a packed venue. Set to make their Tenement Trail debut on the 30th September, we chatted to the band about their litany of accomplishments thus far, their ambitions for the year ahead and more.

Although you are relative newcomers to the scene, the band has already found itself a strong foothold in Scotland’s music scene. How did The Dunts come about and are you pleased with how the journey has went thus far?

Originally three of us went to school with each other and we would always jam in the practice rooms in school and sometimes out of school with other friends who aren’t involved with The Dunts, but nothing serious ever came of it. Our singer/rhythm guitarist didn’t go to school with the rest of us, but he was in our group of friends anyway and had spoke of his interest in starting a band. When all four of us practiced for the first time we got Birds and the Beez written so I think it’s fair to say we thought ‘here, there might actually be something to this..’. We’re genuinely delighted with how the journey has went so far, our first gig was 23rd September 2016 and to be playing Tenement Trail on the 30th September 2017 is madness.

Ranging from headline shows at King Tut’s to trips to Edinburgh and releasing a string of well received singles, you’ve had your fair share of big moments so far. Which ones stand out to you as times where you’ve felt that the band is going in the direction that you’re all after?

I think the first few Control Social Clubs we did were massive for us, as it gave us an idea of the sort of shows we wanted to play and the sort of bands we wanted to play with. Massive respect to Adam Carr who runs CSC, without him I don’t think we’d be as far along as we are. Playing The Priory for Club Sabbath was when we started to really come into our own and our crowds have been a different level ever since that gig. Coming out and headlining a sold out King Tut’s was obviously the first big moment where we could see clear indications that we were beginning to make serious progress. Playing our first out of town gig supporting Rascalton in Edinburgh was up there as well. If you were there, you know.

Your single launch at The Priory was a proper rock ‘n’ roll show with a great supporting cast of bands to boot including Sobriety, Heavy Rapids and Pleasure Heads. Is that the kind of atmosphere that you always strive to create at your shows?

It was a class night from start to finish, I think the fact that we are friends with all the bands we got in to play with us made it more of a show than just a gig with 4 different bands on it. The fact that we managed to get the bands that we got in for it helped us bring in an audience who were interested in more than just one band on the bill which meant the atmosphere was amazing. Definitely something we strive to do at all of our shows.

This year will see you make your debut appearance at Tenement Trail. Is it a show that you’ve been looking forward to?

Before we had even played our first gig we had already said between us that we wanted to play Tenement Trail at some point, so we’re more than buzzing to make our debut.

Do you have any fond memories of shows that you’ve seen at the event in the audience and what can fans expect from your first appearance at the inner city festival?

The one that springs to mind first is The Van T’s last year for their Flat 0/1 headline slot. Fans can expect to find four pals on a stage playing tunes that we’ve put a lot of time into and really, really believe in.

Are there any other artists that you’re particularly hoping to catch on the day?

After the momentum that you’ve acquired from the release of ‘Birds & The Beez’ and ‘G53’, is it safe to say that we might hearing new music from you sooner rather than later?

We’ve been in the studio at 7West Studios with Chris Marshall and Johnny Madden… that’s all we need to say. Soon.

Finally, what would The Dunts like to be able to look back on and say they accomplished when considering 2017 as a whole  and do you plan for 2018 to the site of even more exponential growth?

Coming into 2017 our main goals were to play gigs outside of Glasgow, play King Tuts and play Tenement Trail… there’s a few things in the pipeline that will mean we’ve far exceeded our own goals so I think when we look back on 2017 we’ll have a lot to be proud in terms of accomplishments. In 2018 we’ll be looking to capitalise on that even further. We’re just going to keep plugging away, getting more gigs under our belt and writing new songs. If all goes to plan, with a lot of hard work, 2018 will be the year of The Dunts.

Tickets for this year’s Tenement Trail are available here.

Tenement Trail 2017: Rascalton on their breakout year, 'Lust' and more