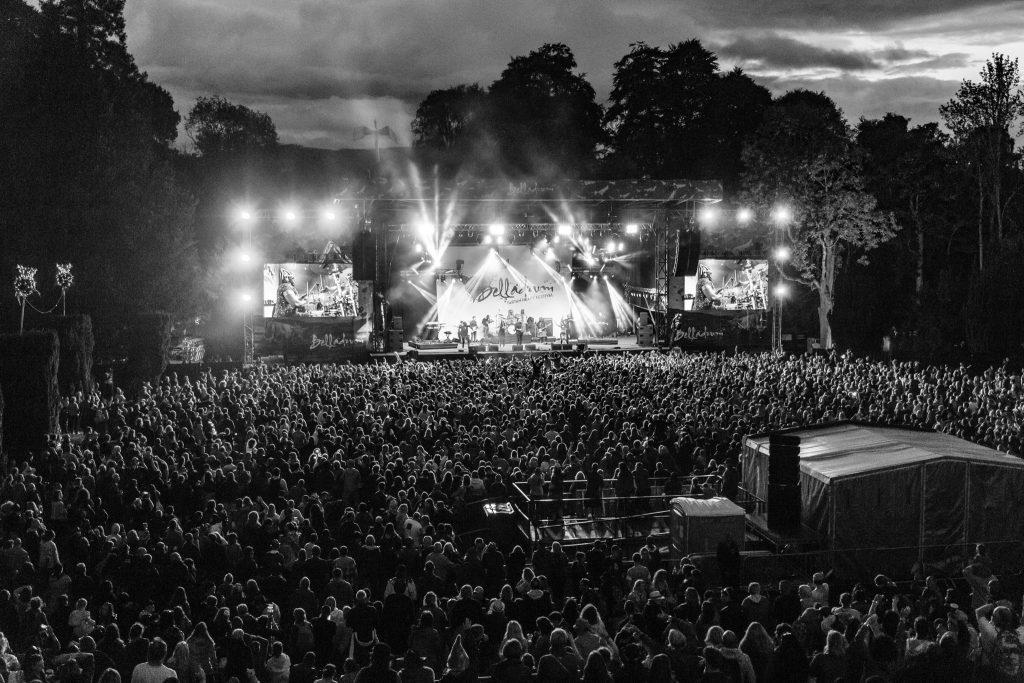 A jewel in the crown of Scotland’s thriving festival circuit, Belladrum Tartan Heart celebrated its fifteenth edition last weekend in truly spectacular style. Returning to its enchanted forest-like setting in Beauly in the Highlands, the festival hosted one of its biggest line-ups to date in-front of yet another sold-out audience.

From its adoring crowds to its wildly eclectic bill to its beautifully scenic grounds, it’s no wonder that Bella has established itself as one of the nation’s most treasured events in recent years. Boasting an exciting mix of star names and breakthrough talent among an atmosphere of warm camaraderie and likemindedness, it’s safe to say that this was a weekend bursting at the seams with special moments.

Like many festivals, Bella is rich in music, food and entertainment; but it quickly becomes clear that it is far more than all of these things. As you leave the world behind you at the gates, you are met a warm, friendly and laid-back festival experience; one that is open to everyone and includes activities for toddlers and teens alongside poetry, comedy and crafts in quieter areas like the Walled Garden. Elsewhere you will stumble across impromptu theatrical performances, kilted yoga and the buzzing Temple of Dub. Full of hidden gems and enjoyable quirks, the beauty of its green, leafy site has to be seen to be believed.

And even though there is a lot vying for your attention, it’s a manageable arena that is easy to navigate; which is handy given the sheer volume of talent on display across the weekend. Music is still the lifeblood of the festival and from jazz to blues to rock to pop, the array of genres on show is impressive and the highlights too many to cover in detail.

Friday sees impressive showings from London outfit Pumarosa on the Hothouse stage who deliver a mesmerising set full of rousing guitars and dramatic crescendos; their frontwoman Isabel Munoz-Newsome owns the stage from start to finish. Elsewhere, The Van T’s offer a powerhouse of noise over at the Seedlings Stage in typically incendiary fashion while fellow Tenement Trail outfit YONAKA show us why they’ve garnered a fierce reputation in about in half an hour of polished melodic punk.

Perhaps the most memorable moment of the day, if not the weekend, comes during The Charlatans’ set. The Manchester legends, vintage yet vibrant, show they’ve still got it as the bleached-haired Tim Burgess bounds up and down the stage full of enthusiasm, tearing through perfect festival hits such as ‘North Country Boy’ and ‘The Only One I Know’.

It is when Frightened Rabbit members Grant Hutchison and Billy Kennedy join them onstage for a powerful rendition of ‘Head Rolls Off’ that the hairs really do stand on the back of everyone’s neck as the crowd roars along with the song in a hugely moving show of solidarity. The Frightened Rabbit frontman’s presence is felt throughout the weekend, particularly during the playback of The Midnight Organ Fight in the Hothouse Stage in place of the band’s scheduled set.  A beautiful celebration of Hutchison and the band’s music, the full tent stands united in grief as well as appreciation for an irreplaceable talent.

The final day of Belladrum features another enviable array of talent. Our Saturday starts with vibrant indie-pop outfit Fauves who arguably deliver one of their finest performances to date in front of a large crowd at the Seedlings Stage; particularly impressive given their early slot time. The band’s progress is evident not only in the tight nature of their performance; but also by the frenzied group at the front who sing and dance along throughout the entirety of their set. Exuding originality and an effortless cool, one particular highlight is a surprising cover of Kali Uchis ‘Just a Stranger’ which indicates the depth of talent in their arsenal.

Saturday also sees appearances from cult heroes Colonel Mustard & the Dijon 5 and Scotland’s guitar-wielding phenomenon Gerry Cinnamon, both of whom pull in predictably massive crowds at the main stage. However it’s Siobhan Wilson over at the Hothouse Stage who seizes our hearts with an impeccable and complex performance that combines sweet vocals, guitar riffs and cello to brilliant effect; standing her apart as one of the nation’s most intelligent songwriters.

TTV favourites The Dunts draw in an impressive crowd despite the dreaded clash with Gerry Cinnamon. Driven by Kyle McGhee’s blistering command of the kit, the four-piece rip through one guitar anthem after the other as frontman Rab Smith stalks the stage full of punk bravado.

Fickle Friends bring some effervescent indie-pop goodness before a vibrant performance from the ever-eclectic Songhoy Blues. However’s, it’s left to Scottish legends Primal Scream to bring Belladrum 2018 to a triumphant close. Delving into their hugely influential back catalogue, the band have the crowd captivated from the outset; led by the incomparable Bobby Gillespie who has lost none of his cool in over three decades as frontman. Ramping up the energy with the intense electronics of ‘Kill All Hippies’, other highlights include the industrial rock of ‘Swastika Eyes’ which is utterly hypnotic while perennial favourite ‘Movin On Up’ receives a rapturous response.  ‘Come Together’ incites a mass singalong before the set ends in euphoric style with ‘Country Girl’ and the funky knees-up ‘Rocks’.

As the weekend draws to an awe-inspiring close with a magnificent firework display, it’s safe to say this was a festival experience not to be missed. Surpassing its reputation as hidden Highland gem to a certified jewel in the crown of Scotland’s busy festival season, all thoughts will already be turning to next year as we wait with baited breath for its next instalment.