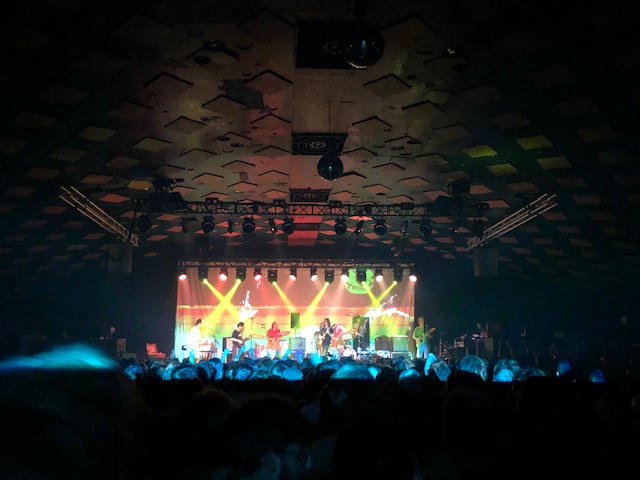 KING Gizzard and The Lizard Wizard made a blistering return to Glasgow, playing to a sold out Barrowlands crowd as part of their extensive world tour. Having released two albums already this year, it was a chance for fans to hear songs from both Fishing for Fishies and Infest The Rats’ Nest along with tracks from their substantial back catalogue.

The lights of the ballroom dimmed and a rotating 3D image of the latest album artwork was emblazoned onto the backdrop as the band walked on stage and opened their set with ‘Planet B’ followed by ‘Organ Farmer’. Infest The Rats’ Nest is without a doubt their heaviest offering to date and the crowd were fully on board from the start.

The visuals behind the stage continued to change from psychedelic patterns to live kaleidoscope reflections of the band themselves performing and even some lyrics during ‘Murder of the Universe’ that wouldn’t have looked out of place in an 1980’s Sci Fi film that all added to the experience. The twin like drummers in matching red jumpsuits with their synchronised drumming were also mesmerising throughout.

“It’s time to get sexy!” announced frontman Stu Mackenzie towards the end of the set before playing ‘Sense’, a slow groove from 2015’s ‘Paper Mâché Dream Ballon’. The night came to a close with a trio of songs from their most recent album, closing with ‘Perihelion’ and leaving the crowd chanting for one more tune.

Trying to predict  what direction the Australian seven piece will go in next is almost impossible. With a staggering 15 albums and 2 EPs already under their belt in just seven years fans will be hoping they don’t have to wait too long to see what they have in store for them.

Catfish and the Bottlemen + Dancing on Tables @ The SSE Hydro