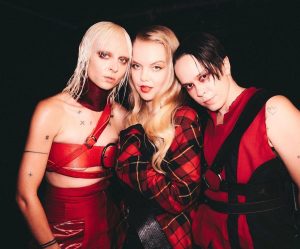 DREAM WIFE are back with their first new single of 2022 and it’s a ferocious rocker called ‘Leech’.

The trio are a force to be reckoned with, railing against patriarchal structures while championing bodily autonomy and unity.

‘Leech’ is their first single since their widely acclaimed second album ‘So When You Gonna….’ from 2020, which also went to reach the Top 20 in the charts.

It’s an anthem for empathy, full of tension, anger and cathartic crescendos. It finds the band at their most unapologetic and uncompromising as they cry out for empathy in these dark times.

They say “‘It’s an anthem for empathy. For solidarity. Musically tense and withheld, erupting to angry cathartic crescendos. The push and pull of the song lyrically and musically expands and contracts, stating and calling out the double standards of power. Nobody really wins in a patriarchal society. We all lose. We could all use more empathy. As our first song to be released in a while, we wanted to write something that feels like letting an animal out of a cage. It’s out. And it’s out for blood…”