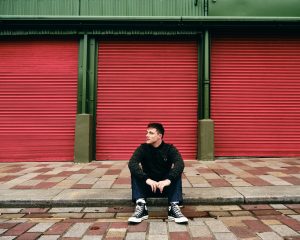 The young star has enjoyed a rollercoaster career thus far; expelled from school when his teachers didn’t believe this dyslexic youngster had written a piece of music so proficient it could be his own work (the school eventually apologised, he left anyway); at 16 he’d earn hundreds of pounds a day busking in Glasgow, with his party trick of playing note-perfect requests from a few bars off a mobile phone; being cast as the lead in a movie after a random meeting with an acting agent; meeting Rufus Wainwright after a gig in Perth and being invited to tour Europe with him; an online relationship with a famous actress; TikTok viral fame for trying on a wedding dress; and now, signing a deal with legendary label Decca and forging a new path for himself.

New track ‘In Denial’ encapsulates all of this early talent and more – an earworm pop song made to be heard on massive stages and complete with rousing blasts of soulful trumpet. With a soulful bluesy sound that sits somewhere between Paolo Nutini and Alabama Shakes, the track is a chance to highlight his incredible vocal range.

It also takes inspiration from a long-distance relationship. “I’m a little bit in love with her, and she’s a little bit in love with me,” he admits. Conducted over social media and phone, the two-year interaction was as long and intense as it was unconsummated and distant – they still haven’t met. The lyrics, accordingly, are dreamily romantic, but punchy too. For all the glory of its chorus, he acknowledges the song “is ultimately pretty brutal”.