THIS Friday, The Ninth Wave release their second album ‘Heavy Like a Headache’ – easily their most ambitious and outstanding piece of work to date.

For a band who have presented themselves in many forms throughout their existence, their second album shows them at their most experimental and personable; energised and confident in their art.

Of course, it arrives with the weight of the news that they will be taking an elongated break after its release. It’s a bittersweet moment for fans who have followed their every move for the last few years – from sweaty underground shows in The Priory and Broadcast to tours all over the UK, Europe and further afield.

With their final swansong set to take place at Glasgow’s SWG3 on Saturday, we catch up with the band’s frontman Haydn about the new album, their hiatus, memories and future plans.

“We recorded ‘Heavy Like A Headache’ in three blocks down in Somerset, where we’ve recorded almost everything since our first release. The first session was in August 2020 and we finished it at the start of last year. We’ve been sitting on it for a long time!”

When you listen, ‘Heavy Like a Headache’ isn’t the sound of a band downing tools; in fact, it’s the opposite. Musically, the album pushes The Ninth Wave further than they’ve ever gone before, pulling from influences as wide-ranging as Yves Tumor, Savages, Eartheater, Kelly Lee Owens and Young Fathers, while retaining their own distinct songwriting craft and approach – its diversity perhaps stems from the fact that all four members contributed to every facet of its creation.  A wholly collaborative effort from start to finish, it presents them as a collective force – matching Haydn and Millie’s lyrical and melodic nous with Kyalo and Calum’s intricately crafted, multi-textured arrangements.

A natural follow-up to their 2019 debut ‘Infancy’ and their ‘Happy Days!’ EP, released in lockdown, their second full-length album takes all the best parts of their previous projects and refines them even further. While ‘Infancy’ glided through an amalgam of genres from 80s post-punk to tumultuous indie, full of large, swelling choruses and majestic, monolithic arrangements, ‘Happy Days!’ scythed its way through real darkness, delving into a canvas of industrial beats, dream-pop soundscapes and dark, electronic textures.

Taking what they learned from those projects, and channelling them into their second album, Haydn says “‘Infancy’ was the album where we found out who we were sonically as a band, where we tried new things for the first time and dipped our toes in the world of synths and electronics. We learned a lot from Dan Austin, who produced it and our first two EPs.”

“This album was produced by ourselves and we’ve taken everything we learned from recording our first EPs, the first album and the Happy Days! EP and made something that we’re really proud of. We tried to make ‘Infancy’ sound as big and grand as we could, but this new album is a lot more sparse in places and it feels like there’s much more separation between each instrument to let each part breathe properly.”

With a strong idea of exactly what direction they wanted to take, they decided to produce the album themselves. Haydn adds “Four tracks on the the Happy Days! EP were produced by Faris Badwan, but two of them we did ourselves. It kinda made us think, “could we do a whole album ourselves?”. As we were gathering songs for this album, we were realising that it couldn’t really be any other way – there were so many things twisting between each other on the songs that it really only made sense for us to produce it ourselves.”

“By the time it came around to record this album, we’d spent quite a lot of time in studios recording music. Between ourselves, Max Heyes who engineered and mixed this album and Phil Parsons who assisted, it felt like it was a good team to pull the album together.”

A deeply personal project to its core, ‘Heavy Like A Headache’ sees the band present their full selves through each and every note. There’s a real rawness and vulnerability to it – both sonically and lyrically. And while they retain that uniquely gloomy yet joyously anthemic sound, they lace it together with more refined electronic nuances and other natural, acoustic elements. Taking many twists and turns along the way, while seamlessly evading any specific genrefication, it’s a potent mix – you only need to listen to the opening surge of ‘Maybe You Didn’t Know’ to acknowledge their growing confidence as songwriters. 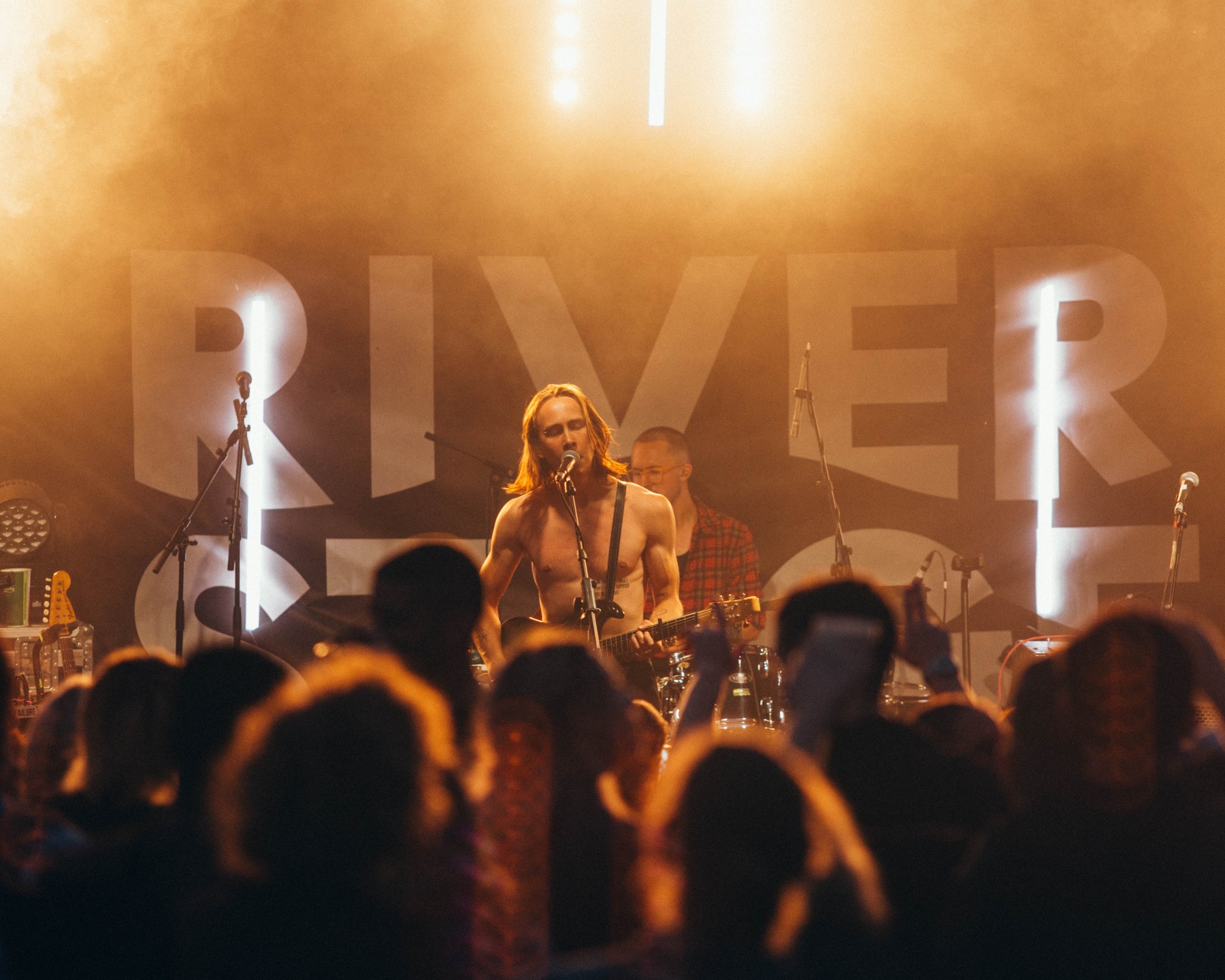 This time, instead of hiding their personal lyrics behind thumping soundscapes and towering synths, they lay themselves bare. Haydn says “All of our individual tastes are really varied – the one that that tied us all together was the want for sparseness. Typically, our sound has always been as big and bombastic as possible, but we really wanted to change that with this record. There are of course loud and abrasive moments, but there’s a lot of sweet and gentle moments too.”

Lyrically, there is a fresh air of vulnerability to the album. And while we’ve seen them delve into personal experiences in the past, we’ve never seen them hold the mirror up so closely before. Now more confident in themselves as songwriters, they’ve been able to dig deeper, and the result is an album that is raw, poignant, heavy, emotional and deeply cathartic.

Whether it’s the heavy, lurching sounds of ‘What Makes You A Man’, an exploration of consent; the heady mix of catharsis and melancholy heard on’ Heron On The Water’; or the powerful sense of loss that hangs over the hypnotic and ethereal ‘Piece and Pound Coins’, or the deep yearning on ‘Hard Not To Hold You’, they offer a deeply moving portrayal of the human experience and self-acceptance.

He adds “We’ve always been very honest in our songwriting and the words have always been informed by reality and our individual human experiences, but we’re just better at putting all of it into words now than we were in the past. We’re a lot more comfortable being open and straight forward about our feelings and the things that we want to say.”

There’s no doubt that ‘Heavy Like A Headache’ is befitting of the circumstance in which it arrives. If it to be their final swansong, it’s a stunning reminder of exactly why they’ll be missed.

Having started many years ago in Haydn’s family home at the tender age of seven years old, it’s fair to say that they’ve erupted away beyond the confines of his childhood dreams – and it’s deeply pleasing to see them reach full bloom with this final incarnation.

Speaking about the reasons for their hiatus, he notes, “It was a sad thing to realise, at first, mainly just because this band has been going for so long. I’ve been doing this since I was 7 years old, Millie dropped out of uni for it, Calum quit his job as a lawyer for it – every member of this band, past and present, has sacrificed something for it. So, to accept that it was time to call it a day was sad at first, but we all know that it’s the right time and we’re comfortable with that.”

“We’ve all got new things on the horizon too – I’m about to start a solo project under the name Last Boy (sign up to the mailing list here), Calum has already played a few gigs as Health and Beauty, Kyalo has been focusing more on his audio/visual work – you can see where he’s playing on his Instagram. Millie has been writing a lot of new stuff too, I’m sure you’ll hear some of that soon. Taking a break from the band just means that we all have the time to focus on new things that are exciting us.”

There are many memories the band can look back on from the last few years – two albums, numerous EPs and singles; UK, European and US tours; two SAY Award nominations; playing shows alongside heroes like Nine Inch Nails, CHVRCHES and Editors, and working alongside revered artists and producers like Faris Badwan, Dan Austin, Max Hayes, Mogwai and more.

Haydn goes on “The fact that we’ve had the opportunity to record three EPs and two albums is pretty amazing. It’s easy to forget how lucky we’ve been to be able to do that, because it feels normal to us now. But thinking back to myself as a young teenager wanting nothing more than to be in a studio recording music and then getting to tour that music, I’d have not really believed you if you told me that I’d actually get to do that. We’re all incredibly grateful for the opportunities we’ve had as a band and I’m proud of what we’ve done.” 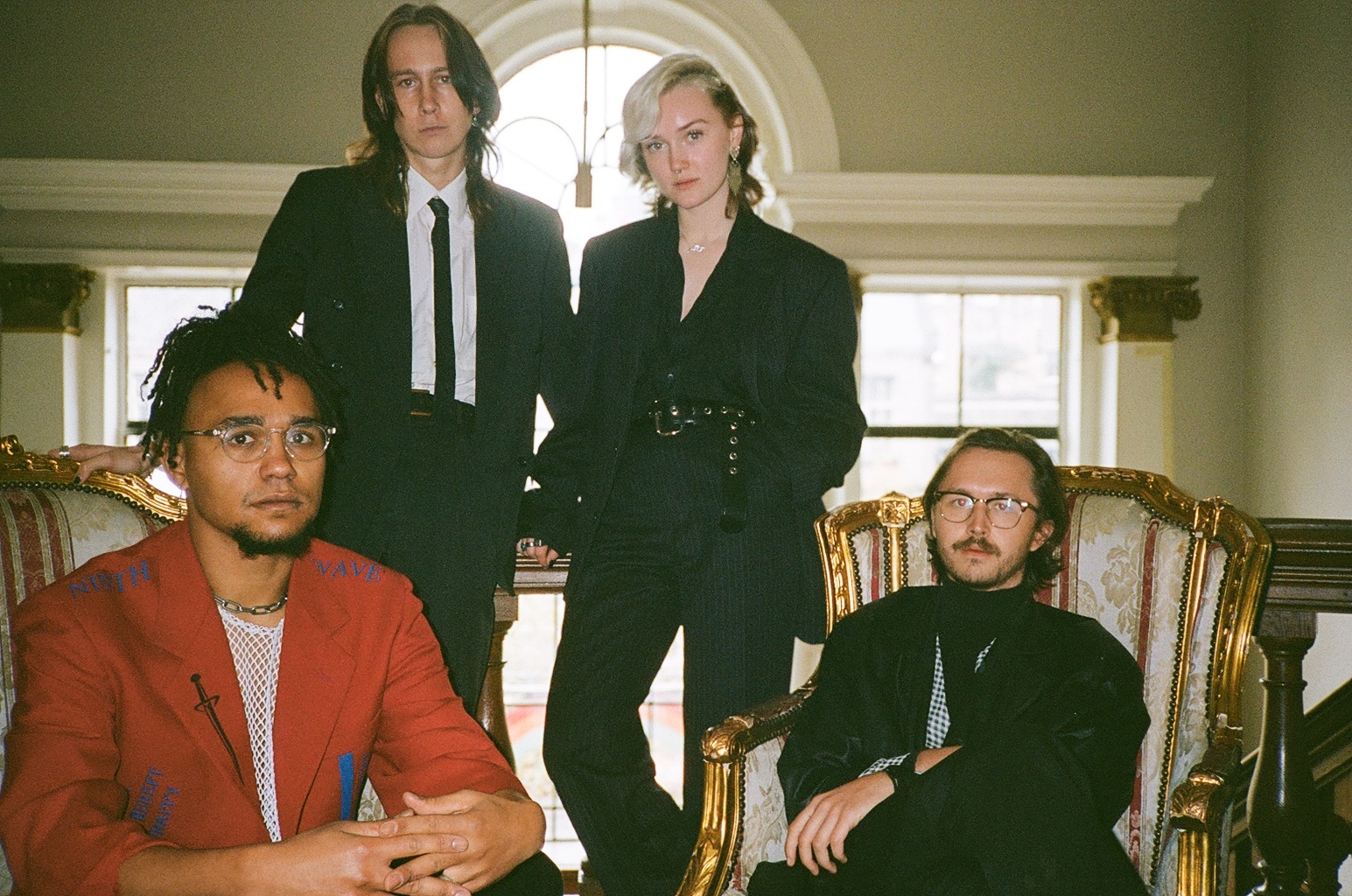 Of course, TTV have followed the band from their very formative years – from sweaty underground shows in The Priory, Sleazys, Broadcast and Flat 0/1 to headlining Saint Luke’s, Oran Mor and supporting at the Hydro. With every new addition and compelling release, we’ve seen them evolve into one of the nation’s most exciting and creatively inspired outfits.

There’s no denying that Glasgow is integral to their identity as a band – not only is it where they met, but it’s also provided the setting for them to evolve into the band they are now.  Spearheaded alongside the likes of Lucia & the Best Boys, Walt Disco and Declan Welsh & the Decadent West, they’ve helped to create a community that has injected a new lease of life into the city, where everyone’s differences are celebrated and encouraged.

Looking back on the early days, Haydn says “When we were first getting started, playing our first proper Glasgow gigs and getting to know everyone in the scene, it was a really exciting and nurturing place to be. We played small shows in The Priory, Sleazy’s, Broadcast, Berkeley Suite. I’ll always remember playing the Dead Beet Records all dayer for Record StoreDday. We were so excited to be asked by a DIY Glasgow label (ran by Conor Goldie) and that was the show that Hamish, our manager, first saw us. At the time I was obsessed with his solo project, Roxy Agogo, so when he came up and briefly said hello at that gig, I was a wee bit stunned.”

Their ability to foster emotional connections with fans, particularly at live shows, lies at the heart of their appeal. And it’s this that the band will miss the most.

He says “I’ll miss the gigs more than anything. The tour we did at the end of last year was pretty special, and it was tinged with a wee bit of sadness knowing that it was the last time we would play in some of those places”

There’s time for one final swansong though – and it’s set to be a night to remember at SWG3 in Glasgow. A chance to celebrate the band, their new album and all their achievements, there may even be a chance to dip into their back catalogue once last time.

“They can expect to hear a good bit from the new album but also a couple of tunes that we’ve not played live for a long time. It’s quite a long set too. Smiles and tears!”