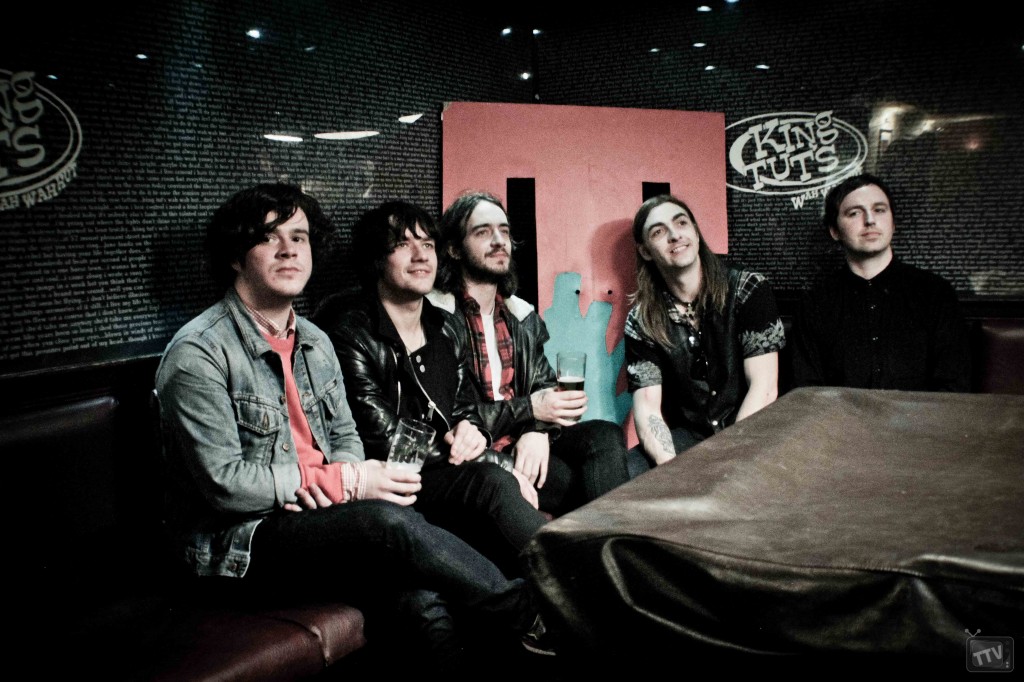 THE VIEW rocked Glasgow at T in the Park’s Roadshow on Monday with their double set creating monumental buzz around the city. Tenement TV were there to catch all the action with the Dundee lads who are just back from a typically-crazy North American tour as we spoke stage-invasions, their new album and special memories at T in the Park.

“When Pete and I were 13 we went to see Oasis at T in the Park- it was the 10th anniversary of them being together as a band. We ended up right at the front and were on the TV. My mum taped it and that and we used to watch it and it was amazing seeing us on the TV when Oasis were playing.

“That’s one of my favourite T in the Park memories,” Kyle gets all nostalgic as he reminisces about the past years of T.

Pete starts: “Best memories in terms of playing the festival, it had to be the first time we headlined King Tuts Wah Wah tent. We had to get a helicopter to Oxygen in Ireland, and then get it back to headline T in the Park’s King Tuts tent.

“That was a pretty special day for us as a band.”

Kyle chips in: “There were two at King Tuts that were really special- they are definitely our favourite memories of T in the Park as a band, monumental for us really.”

As the conversation flows, the band continue to dive into all of their T in the Park memories as Steven says: “The very first time we played T in the Park as well, that was amazing. I went to see Rage Against the Machine for the first time at T in the Park in 2008, that was really memorable for me.”

Pete adds: “Even last year when The Stone Roses played, that was a good T in the Park, it was a bit mental.

“So book us for King Tuts again! We love T in the Park, keep asking us back.”

T in the Park is about to celebrate its 20th year of festival greatness. The Scottish festival has seen the likes of Pulp, Blur, Primal Scream, The Coral, The Strokes and The Arctic Monkeys top the bill since its birth in 1994 and special to a lot of bands for its atmosphere and energy: “It’s on our doorstep really; its only 20 minutes up the road from where we grew up,” Kieran says.

“The Scottish crowds are just the best crowds.”

Pete adds: “There have been so many amazing acts that played T in the Park eh, it always pulls the acts. I am looking forward to seeing Rihanna this year, I’m not going to watch her but I am going to try and look at her backstage. In fact, I probably will watch her after seeing her kicking about backstage.”

More than just a weekend for some, Kyle talks about T in the Park’s effect on him as a kid: “It takes over your Christmas, when you discover Santa isn’t real you start looking for something else.

“At least T in the Park is real. It gives you something to look forward to every year.  When I used to go as a fan I always wondered what it was like backstage and that. It’s mad being backstage now.

“You have got to be at a certain level to be able to kick about the campsite now; you have to be like ‘right, I’m ready, ken?’”

The View have come a long way since the release of Wasted Little DJ’s in 2006. Their debut album Hats Off to the Buskers gained a Mercury Music nomination after its release in 2007 and they have enjoyed headline tours around the world. The band are now gearing up for a tour with The Stone Roses and are set to release their Seven Year Setlist: “The release of the Seven Year Setlist makes us feel really old,” says Kyle, “The reason we done it was so we could release songs we weren’t allowed to release in certain countries for whatever reason.”

Pete adds: “It’s good to release the Seven Year Setlist and recap. Gives us an opportunity to think about how far we have come. And we get to make it into a vinyl so it’s another one for the collection.”

All the talk of milestones gets Kieran inspired as he admits: “We are going to bring out a new album really quickly after the Seven Year Setlist, I just decided that right there!

“We have some tunes, we have been thinking about what the new album will be like. We just need to record them.”

From the great heights of headline slots at T in the Park, to sets at Glastonbury and even a tour in America- The View are a band who stay true to their Dundonian-roots with their cheeky laddish charm still intact. Kyle reflects on The T in the Park Roadshow: “Today was amazing at the T in the Park Roadshow. A mosh pit at 4 o’clock in the afternoon in Buchannan Street is mental; I never thought I would see that like.”

Kieran buts in: “It’s better than playing to seven people in a bowling alley in Detroit.”

Their recent tour of North America caused a stir with the locals and even caused a memorable stage intrusion of fans. Pete spills: “You should turn the camera around to the guy who is hiding behind it- our Tour Manager started the stage invasion!

“He was shouting ‘Come on the stage’. Normally they get pushed back, but he was like its fine come up and he was helping them on stage.

“Are you sure you’re alright mate, I could catch a heat off your face?”

With great memories shared, the future of The View discussed and a Tour Manager well and truly embarrassed, Tenement TV end our time with The View. They remain tremendous at indie rock ‘n’ roll, with their fans ensuring that they never put out their fire.