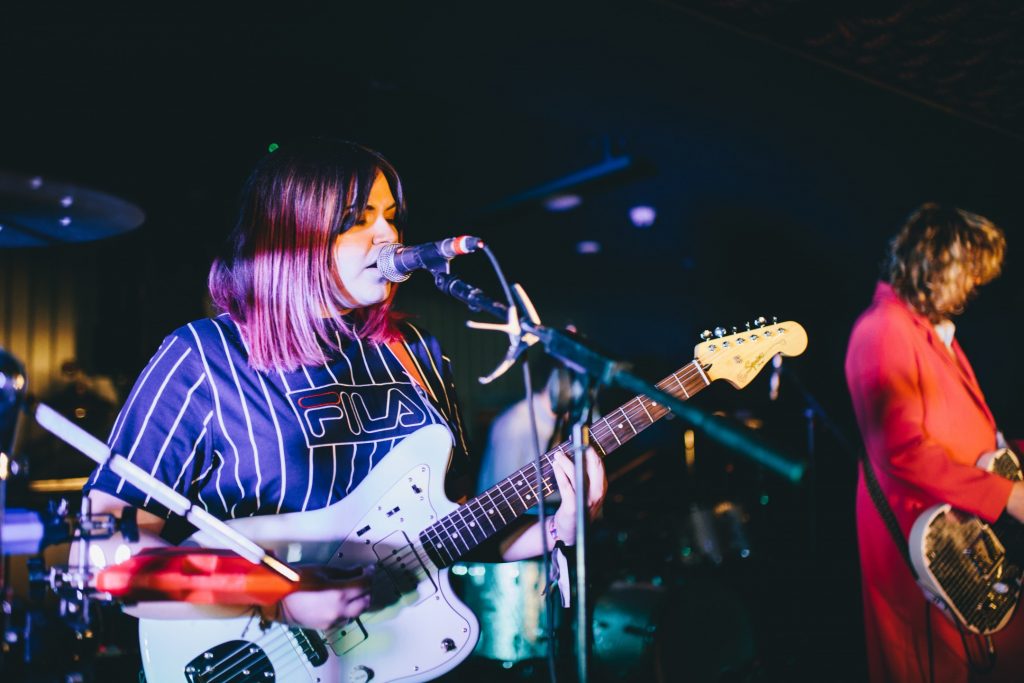 AHEAD of their appearance at Queen Tut’s this Friday, Tenement TV caught up with Marie and Gian of The Vegan Leather to chat about their excitement for the show and women in music.

“Events like Queen Tut’s are vital. It’s important to showcase underrepresented artist in whatever way we can. As a white male in the music industry I recognise my privilege, and I have witnessed first hand some who take it for granted. As a band we’ve been in environments where Marie can be treated very differently to the rest of us even though we are all doing the same job. But it is clear there is a shift taking place in the industry away from these negative attitudes. And events such as Queen Tuts, The SMIA’s Women in Music Panel, SWIM and Queens of Noise will give this movement a bit of momentum. I’m excited to get involved with such an important project that will promote change for the better. It’s great to play again with The Van T’s, it’s been a good few years since we last shared a stage. I’m very excited to finally see Scarlett Randle as well.”

The Vegan Leather occupy their place within the close knit Glasgow scene, something Gian sees huge positives in.

“In my experience, Glasgow has a very open attitude to anything that may be considered different in terms of artistic endeavours. Obviously there are areas that can be improved, but it’s a very close knit community with a lot of respect between artists and has the potential to be a good breeding.”

As a male artist, Gian finds himself seeking artistic inspiration from notable female figures, and find collaboration with female musicians a natural process: “Some of my biggest musical inspirations are Róisín Murphy and Annie Clark, both are the absolute epitome of what it means to me to be an artist. Róisín Murphy is one of the first voices I can remember hearing on the radio when I was young, her work a solo artist and with Moloko has shaped my understanding of dance music. And Annie Clark is just one of the most iconic performers of modern times. Her visionary style of guitar, song writing and production influences and inspires me deeply.”

“I work with female musicians on a regular basis and I value them just as much as their male counterparts.  I have always thought that if I connected with someone on an artistic level, I would work with them. We formed TVL as the four of us had all worked with each other on previous projects, us coming together was incredibly natural. Our relationship with each other is based on friendship and complete trust in each other’s talents.”

As the female force within The Vegan Leather, Marie has noted a stark contrast between the relationship with her bandmates, and those outwith the group.

“On the whole, my experiences have been mixed in respect of recording and playing live as a woman. I couldn’t ask for better bandmates to work with, and our professional relationship is a strong and equal one. However, outwith the band setting there are definitely times where I feel patronised as a woman, particularly in regards to performing live. I’ve had sound engineers asking the guys to check if my guitar is plugged in properly, or asking questions like “are you sure your amp is turned up?” It’s subtle things like this that can be really off-putting working in the industry, especially when your male counterparts aren’t given the same treatment. I think when it comes to the technical side of music, it’s often regarded as a man’s domain. It’s become a weird cultural acceptance that men are more capable and more fluent in technical language, and that somehow women are incapable of working their own pedal boards. There is a huge gender gap in women’s representation in audio, engineering, production and music itself – particularly electronic music. Women need to be taken seriously in live and recording settings, and not just seen as an accessory to the band. There should be no prior judgement of a woman’s knowledge of her own equipment, before making a wrong assumption. On a positive note, I have worked with a lot of amazing engineers, and haven’t felt that being a woman has negatively affected their attitude towards me. TVL have also just completed a large amount of recording, and the process with our producer was absolutely incredible. Inspiring, fun, and we all had equal input into the production side of things.”

Working with the guys in The Vegan Leather has seen an incredible friendship develop, where all members work well together an a unit: “The best thing about working with the TVL guys is that I love them as people. We take TVL seriously, and work professionally, but we’re also best friends, and have such a good laugh together. I know they would stand up for me without question, as I would for them. Not to sound cliche, but being in a band is like being part of a family, and it’s the best feeling ever to share a big part of my life with 3 amazing people.”

Like many female artists, Marie sees the positives and negatives of the music industry first hand: “I think there’s definitely positive and negative aspects about being a woman in the industry. I think it can be very intimidating to be in a room full of industry types where the majority are men. There’s a really great Stevie Nicks interview where she talks about how she and Christine McVie had the challenge of getting proper recognition and writing credits in their contribution to Fleetwood Mac. She said “ We decided we were never going to stand in a room full of Eric Claptons, and Jimmy Pages, and Robert Plants, and Stevie Winwoods, and Peter Townshends, and feel like we were less than they, because we’re not.” It’s sometimes challenging to stand in similar situations, and fight for your voice. I think you have to have a lot of self belief and determination to put yourself out there as a woman, and know that just because there may be less of you, it doesn’t mean you are lesser. In that respect, the industry is hard, and there are still a lot of barriers to face. However, events like Queen Tut’s, and collectives like SWIM (Scottish Women Inventing Music) are absolutely vital to women working in music, and are an incredible support to people like myself trying to navigate through the industry.”

Marie’s female musical inspiration stemmed from an unlikely encounter with an ASDA advert years ago: “I have always been completely in love with Nina Simone. I first heard her music in an ASDA advert promoting her CD when I was around 13. I made my mum drive us there, and listened to the whole album on the way home. I’ve been hooked ever since. Growing up and realising the social power of Nina Simone’s music has had a huge influence on the way I think about music as a tool for change, and how I conduct myself as a musician, and supporter of other women. Nina Simone used music as a weapon for social change during the civil rights movement, and her songs stood up to injustice and inequality. Any woman making art, or putting themselves out there is standing up to inequality. The women in my own local music scene who are working hard every day to represent themselves, to fight for their equality as artists inspire me. It’s such a scary thing to put yourself out there as a musician, let alone as a woman. This goes for the women working behind the scenes too! ”

As an inspiring woman within the music scene, Marie hopes her position on stage can provide inspiration for the next generation of female artists: “I think by being visible on the music scene is a step in the right direction for inspiring young women to get involved in music. It can be off-putting to be part of something where you don’t see your identity being represented. I’ve been inspired to put myself out there by seeing strong, powerful women on stage. Seeing such a strong representation of women in my local scene has definitely been encouraging and empowering for me throughout my career.

“To women everywhere whether making music or not, my advice would be to ALWAYS believe in your worth and value. Be unapologetically you, and support other women around you. We’re in this together!”

Tickets for Queen Tut’s are on sale now.