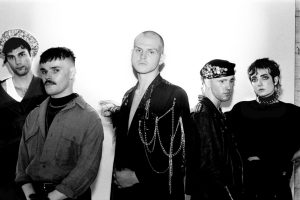 Meanwhile, the 13th edition of the event will also feature live performances from VLURE, Becky Sikasa and The Honey Trap.

New music champion Jim Gellatly and highly-acclaimed poet Leyla Josephine will host the evening, which will see awards given to seven of the most outstanding artists working in Scotland today.

As in previous years, the SAMA 2022 seven award categories are Best Live Act, Best Hip Hop, Best Newcomer, Best Acoustic, Best Metal, Best Electronic and BestRock/Alternative. Nominations for each category will be put forward by teams of promoters, programmers, broadcasters, podcasters, editors, writers and artists from organisations such as Amazing Radio, BBC, Jupiter Rising, Scotland in Colour, Tenement TV, Time Out, The Skinny and Up2standard. A full list of nominators is available on the website. Nominations for the seven awards will be announced mid November with the SAMA 2022 winners chosen by the public via an online vote later that month.

Founded over a decade ago by Richy Muirhead, the SAMA have grown in prominence over the years, with past winners including Fatherson, Hector Bizerk, The Snuts, Gerry Cinnamon and Lewis Capaldi, recognised long before his debut EP release.

Richy Muirhead explains: “SAMA 2022 aims to put a spotlight on genres and artists who have been working hard and making moves over the last 12 months! The showcase artists and nominations list reflect the creativity and quality of music coming out of Scotland in 2022. We’re thrilled to host the 13th edition of the event in Glasgow!”

Now in its 13th year, the event marks a festive highlight for what’s since developed and diversified into a year-long operation presenting other activities including the Paisley Takeover and Pitch, Scotland’s conference of hip hop and underground culture, presented in 2022 in partnership with FOCUS Wales and Europe’s biggest hip hop conference, New Skool Rules. 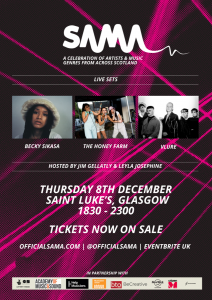