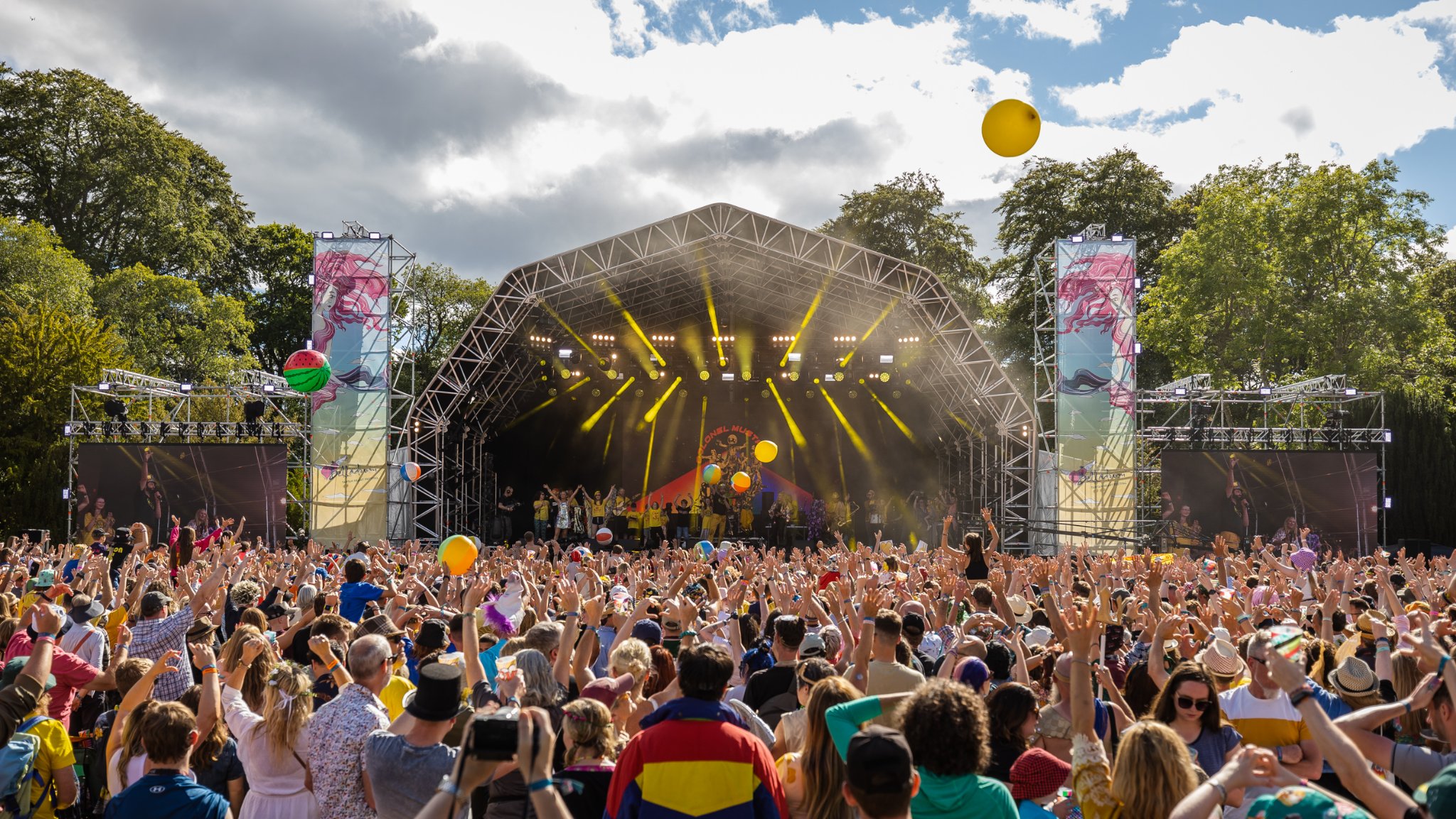 A jewel in the crown of Scotland’s thriving festival scene, Belladrum Tartan Heart Festival made a triumphant return last weekend after a pandemic-induced three-year absence. Returning to its enchanted forest-like setting in Beauly in the Highlands, the festival hosted another wildly eclectic line-up in front of a 20,000-strong crowd of all ages – with everyone in attendance seemingly ecstatic to be returning to its hallowed fields.

From the moment you arrive on site, it’s clear that Belladrum attracts a sea of varying personalities – the general camping area is filled with a mix of families, babes in arms, young people painted in neon, experienced rockers and those chasing a hedonistic weekend. And as you enter the festival site itself, you see that there’s something for everyone – from the rides, stalls and food trucks sprawled across the site; to the numerous different tents and stages; to the many splashes of creativity and hidden quirks nestled around the scenic grounds.

Channelling the bonkers energy of Glastonbury on a far more manageable scale, it’s no wonder that Bella has established itself as one of the nation’s most treasured festivals. As you leave the world behind you at the gates, you are met with a warm, friendly and laid-back festival experience; one that is open to everyone and includes activities for toddlers and teens alongside poetry, comedy and crafts in quieter areas like the Walled Garden. Elsewhere you will stumble across yoga, spoken word and a buzzing dance tent. Full of hidden gems and enjoyable quirks, it’s fair to say that organisers have thought of everything.

Of course, music is still the lifeblood of the festival. In this respect, not much has changed in the three years since its absence – asides from relocating some stages ever so slightly – and from traditional folk to soul to rock to pop, the array of genres on show is impressive and the highlights too many to cover in detail – it’s a weekend bursting at the seams with special moments.

Our competition winner Tina Sandwich opens The Garden Stage with much aplomb on Thursday afternoon, showcasing heaps of charisma and stage presence. With only one song officially released this now, ‘Up All Night’, there’s plenty to come from the Glasgow-based singer – including a coveted slot at our very own Tenement Trail.

On Friday, Lucia & The Best Boys bring gothic glamour, plenty of style and tunes galore to the new-look Hot House stage. Her sound has evolved massively over the last couple of years – it’s more widescreen, emotive and layered – and when combined with her renowned stage presence, it makes for a stand-out show. Currently working on her long-awaited debut album up north, we’re excited to see how it develops.

The Friday evening also marks the live return of Neon Waltz. The John O’Groats outfit have been quiet for most of the year, buckling down in the studio to work on their second album and the follow-up to ‘Strange Hymns’. With that in mind, we are treated to a couple of new numbers – they’re delivered confidently alongside the older songs and indicate an ambitious and instantly gratifying shift for the outfit. Saying that, ‘Dreamers’ remains the highlight of their set – a powerful anthem of hope driven by steadily mounting percussion, it’s dutifully met by the crowd’s rapturous approval.

Over on the Garden Stage, Ibbio Sound Machine bring vibrant, heart-thumping beats and disco/new wave vibes to the Garden Stage – prompting fists up in the air and plenty of dancing.

Similarly, Tenement Trail headliners Vistas don’t hold back on the good vibes. Seasoned pros, they may be playing to a smaller crowd than they’re used to these days, but they hit out with banger after banger from their first two albums ‘What Were You Hoping To Find?’ and ‘Everything Changes In The End’. The predominantly young audience lap it up, singing along to every tune and throwing each other on shoulders. Brimming with indie-pop hooks and summer vibes,  they’re the perfect festival band.

Moving over to the Seedlings Stage, fellow Tenement Trail outfit Gallus put in an incendiary display that suggests they’ll be on far bigger stages in years to come. The band have played some of the biggest shows of their career this year – and it shows. Ferociously tight and well-drilled without losing that brilliant sense of chaos and vitality which drew us to them in the first place, they whip the crowd into a frenzy with ‘Fruitflies’, ‘Eye To Eye’ and ‘Marmalade’ – the latter of which sees the crowd jump up from the ground in unison for the final chorus. We’re treated to some impressive new material as well – a sure indication that there’s plenty more to come from the five-piece following their signing to Marshall Records. Brimming with showmanship and undeniable charisma,Barry Dolan is in rabble-rousing form – stalking the stage with a glint in his eye, before jumping in and out of the crowd, along with bassist Craig Duris. And while the rain may play in their favour with many people seeking shelter in the tent, we’re sure they leave with a host of new fans in the process.

From the best of the new class to established Scottish veterans, The Fratellis perform a career-spanning set over on the Garden Stage – complete with celebratory brass section and backing singers. ‘Chelsea Dagger’ inevitably gets the biggest cheers of the night, as Barry Fratelli sincerely thanks them for their support. Elsewhere, the site is buzzing with activity – with northern soul classics on the Ice-House stage, thumping electronica at the Mother’s Ruin Stage and more, meaning there’s plenty on offer for those wanting to dance the night away. 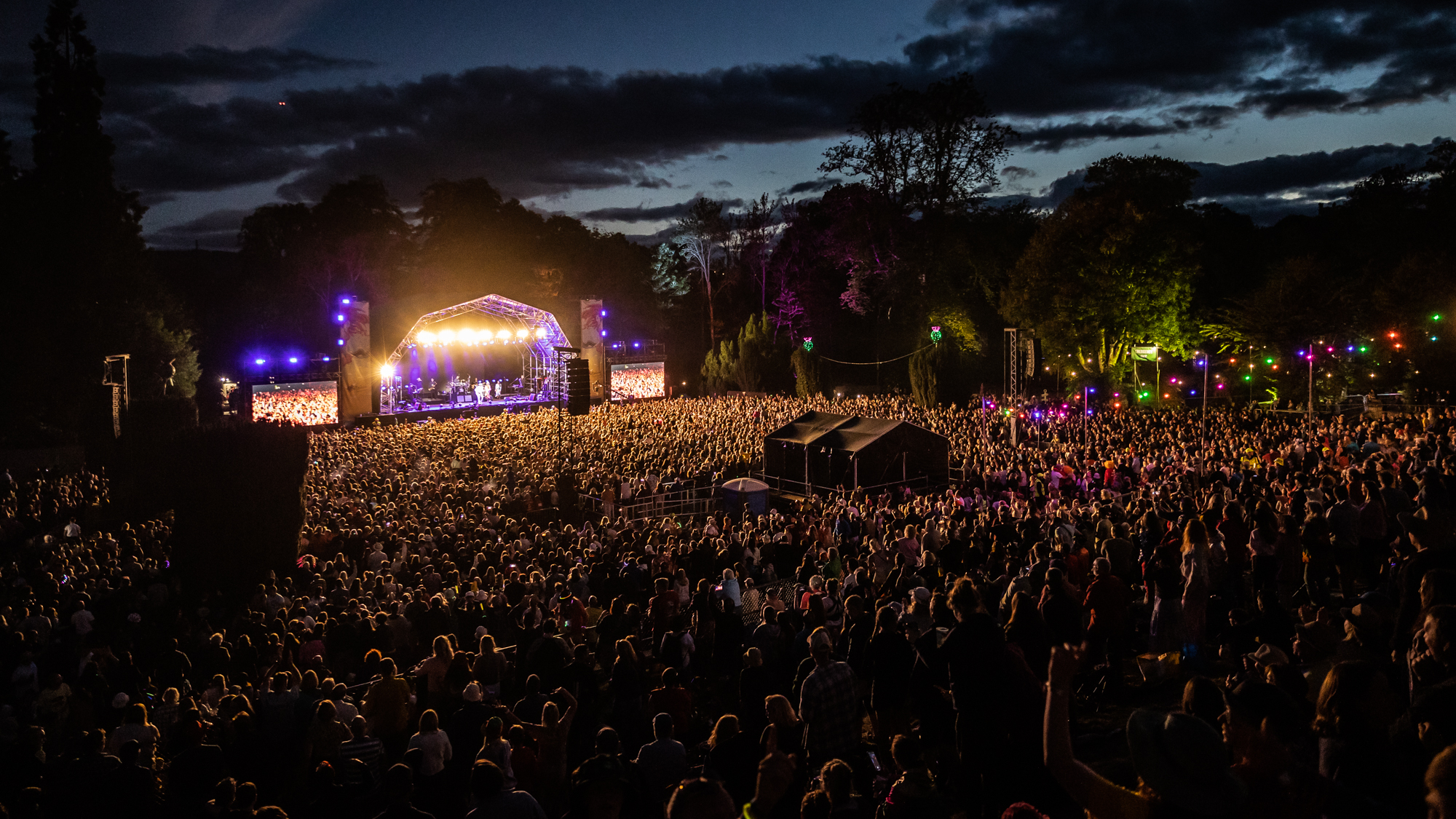 The sun rises on the final and busiest day of Belladrum as a host of new arrivals descend on the site for another jam-packed lineup. Seemingly never too far away from a set of bagpipes, pipers and marching bands make their way through the crowds, while early afternoon wanderers make the most of what the colourful site has to offer. Over on the Hot House Stage, Lizzie Reid eases us into the day with her gentle, soothing tones. With her new EP ‘Mooching’ out in the not too distant future, her intimate indie-folk songs gain a new life when performed alongside her hugely impressive backing band – she runs through her more expansive new material, and favourites like ‘Company Car’, ‘Tribute’ and ‘Been Thinking About You’ in front of a reverent audience.

On the same stage, Walt Disco bring their charismatic and wondrously eclectic live show to Belladrum. Again, it may be a smaller crowd than they’re used to this summer, but it doesn’t stop them putting in a high-energy display. James Potter is brimming with pop star credentials, their operatic vocals shifting from heart-aching and poignant to anthemic and defiant – over an ambitious backdrop of glitzy glam-rock. Now a well-oiled live machine, they’re as magnetic as ever.

The positive vibes continue throughout the day. Viral Eurovision star Dadi Freyr wins the crowd over with nods to ‘Loch Lomond’, ‘All Star’ and plenty of jokes. Like a blend of pop and panto, he’s a born performer – confidently walking the line between silliness and self-parody. Of course, he has many of his own sophisticated pop hooks as well – none more so than on massive hit ‘Think About Things’.

The Grassroots Stage, which has hosted the likes of Luke La Volpe, Matilda Mann and Edwyn Collins over the weekend, is also home to wide array of traditional folk music. Manran prove a big draw with their contemporary Gaelic tunes. Having played all over the world, the atmosphere is electric during their uplifting set – and they’re quick to thank the Highlands crowd for a triumphant homecoming.

Of course, Saturday night is all about Nile Rodgers and Chic. Easily the biggest draw of the day, the crowds pack in tightly around the Garden Stage for their headline set – and they do not disappoint. In fact, they deliver the ultimate sermon in positivity and feel-good funk – pulling from Rodgers’ back catalogue with ease. There’s too many highlights to mention – EVERY song is a hit, from ‘Get Lucky’, ‘We Are Family’, ‘Everybody Dance’ to ‘Material Girl’ and ‘Let’s Dance’. Expertly marshalled by virtuoso guitarist Rodgers, they’re the ultimate headliner – and the perfect ending to another memorable festival.

As the weekend draws to an awe-inspiring close with a magnificent firework display, it’s safe to say that Belladrum is a festival experience not to be missed. All thoughts will already be turning to next year as we wait with bated breath for its next instalment.