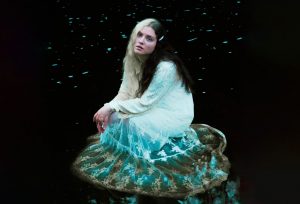 Originally from the Scottish Highlands but now based in Leeds, the singer-songwriter has been building on the experimental sounds we first heard on last year’s ‘Different Characters’ EP – taking her music down increasingly intriguing and rewarding new routes.

Heavily inspired by art-pop and trip-hop, ‘Spend Time Wasting’ is a dreamy, immersive track featuring layers of arpeggiated synths, syncopated beats and ambient atmospherics. Encouraging the listener to slow down and embrace some down time, Sillars’ enigmatic vocals weave in and out of the infectious grooves and meticulously crafted soundscapes – lending a freeing, transportive quality to the track.

She told us: “Spend Time Wasting is an anti-grind culture song. I am constantly overworking myself, and I think especially post-pandemic, I’ve been trying to learn to trust the process and not worry as much as I do. Spend Time Wasting is about enjoying your free time, learning to waste your time and not getting worked up about the little things. Musically, this one changed a lot in the writing process, and it’s another collaboration with producer Kieran Watson and my backing band. It has a slightly more hip-hop feel musically compared to my other work, and we wanted all the elements to speak to that feeling of laziness and relaxation.”

Now available on all streaming platforms, the single is also being released on vinyl via Leeds label Come Play With Me, sharing a 7-inch split with Fuzz Lightyear. Chosen from many applicants, it will be the last one released as part of the label’s singles club which has been running for seven years.

Josephine adds: “Working with Come Play With Me has been a really great experience! This song is going to be my debut vinyl, a split 7” with Leeds band Fuzz Lightyear. It’s part of a ‘Singles Club’ that Come Play With Me runs, and this one is actually the last one they’re doing in this format! I feel really honoured that they chose Spend Time Wasting for this release – there’s no way I’d be doing vinyl without them!”

To coincide with the single’s release this week, Josephine will become a member of Declan Welsh and the Decadent West for the night at their sold-out headline show at the Barrowlands tomorrow night (Friday 18th November).

She will also play her own headline show at Glasgow’s Hug and Pint on 11th December with support from Philomenah and Casual Worker.