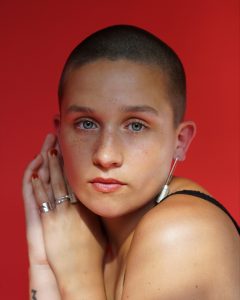 FOLLOWING the release of their debut single ‘Flames earlier this year, Terra Kin has shared the captivating ‘Shadows’.

The song is taken from the debut EP ‘Too Far Gone’ which also arrives today – marking the Glaswegian out as one of the most intriguing and compelling new artists on the scene.

Arrestingly sparse, ‘Shadows’ allows Terra Kin’s vocals to take centre stage as they reflect on a period of infatuation.

“I’m a very vivid dreamer,” tells Terra Kin. “I wrote Shadows after having a certain person revisit me in my dreams, dreams that were inescapable. They led to false narratives, and in turn made me romanticise this person. I refer to them as a shadow to symbolise the fact they weren’t actually physically there.

I always kept my songs in the confines of my bedroom, but after writing shadows my Grandmother (who lived with my family and raised us) became very unwell. We cared for her in my family home and I played the song to her. It was the last time she heard me sing. I realised it’s not about romanticising a silly boy, it’s about longing and trying to grasp something that isn’t quite in your reach. I love the immortality of dreams yet how fleeting they are.”

Debut EP Too Far Gone documents the different stages of falling into lust. The desire to be desired and the overpowering of all other emotions, leaving no room to find a flaw in the other person. “It’s about lifting your head above the water, being super honest and unafraid to communicate how you feel,” notes Terra Kin. “Reflecting and shedding a new layer. I imagine each track as a different stage of emotion.”